BY Heather Hughes on July 11, 2019 | Comments: one comment
Related : Soap Opera, Spoiler, Television, The Bold and the Beautiful 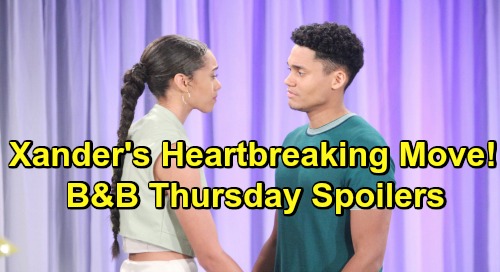 The Bold and the Beautiful (B&B) spoilers for Thursday, July 11, tease that Zoe Buckingham (Kiara Barnes) and Xander Avant (Adain Bradley) will reach an impasse. It’s clear that they’re not on the same page regarding Thomas Forrester (Matthew Atkinson) and all the secrets they’re keeping. Zoe’s adamant that Xander needs to keep his mouth shut, but Xander’s ready to shout the truth from the rooftops.

Now that Xander knows about Thomas and Hope Logan’s (Annika Noelle) engagement, he’s beside himself. The idea of letting Hope marry a manipulative murder is too much for Xander to accept. In fact, Xander will grow increasingly appalled as Zoe stands against him. If this is who she is, Xander won’t be sure they’re really compatible anymore.

The Bold and the Beautiful spoilers say their relationship will be hanging by a thread on Thursday. Xander will contend that it’s time for Zoe to make a choice. He’ll deliver a shocking ultimatum that leaves Zoe reeling. She may be frustrated with Xander for putting her on the spot, but he’ll insist this is how it has to be.

It sounds like Zoe’s options will be to get on board or get dumped! Xander may argue that if they’re not in agreement on something this huge and morally wrong, they’ll never be able to make it work. Since Zoe won’t be running off with Xander to blab, she obviously won’t give him the answer he wants.

However, Xander won’t be spilling any big news either. That means his plan will either be thwarted by more threats or he’ll simply chicken out for Zoe’s sake. Regardless, Thomas’ scheme will remain intact. He’ll move forward with his wedding plans, but the naysayers in Hope’s life will cause problems.

The Bold and the Beautiful spoilers say Brooke’s outrage will persist in Thursday’s episode. B&B fans can expect this mom to get fierce about protecting her daughter. Brooke would do just about anything for Hope, so she certainly won’t sit back and let these nuptials happen. Instead, Brooke will do everything in her power to make sure this ceremony is shut down.

Alas, Thomas is a tricky character and won’t be stopped easily. The Bold and the Beautiful spoilers say Thomas will fight just as hard to make Hope his wife, so Brooke will face major hurdles. We’ll give you updates as other B&B details emerge. Stay tuned to the CBS soap and don’t forget to check CDL often for the latest Bold and the Beautiful spoilers, updates and news.