BY Heather Hughes on July 10, 2019 | Comments: one comment
Related : Soap Opera, Spoiler, Television, The Bold and the Beautiful 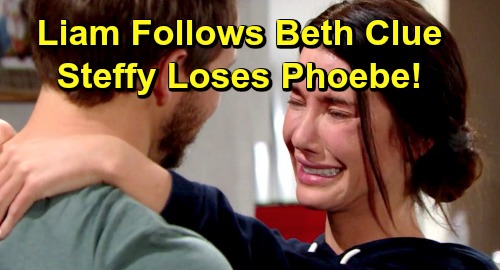 The Bold and the Beautiful (B&B) spoilers tease that Liam Spencer (Scott Clifton) will overhear something peculiar. He’ll listen in on a conversation that’s not meant for his ears, so that tells you a lot about the content of this chat. This will undoubtedly have something to do with either Thomas Forrester’s (Matthew Atkinson) guilt, the baby swap secret or both.

Liam will eavesdrop during the week of July 22-26, so this hot plot will keep moving right along. What exactly will Liam overhear and what will he do with this information? The Bold and the Beautiful spoilers say Liam will grow curious thanks to this incident. Perhaps that’s a hint that leans more in Beth’s direction than Thomas’.

This makes it sound like Liam is just interested and puzzled. If this hint was about Thomas’ involvement in Emma Barber’s (Nia Sioux) death, Liam would probably blow his top. He can barely control his temper when it comes to Thomas and his manipulative behavior. Liam would surely jump to conclusions, even without a major bombshell.

Since Liam will simply be curious instead, maybe Beth’s name will come up in this discussion. We can assume Liam will be listening to some of the secret-keepers. He may wonder why they’d be discussing his dead child. Liam obviously doesn’t suspect Beth is still alive, so his mind wouldn’t go straight to a baby switch. He’d just think it was strange and wonder what was going on.

However, the important part is that Liam will indeed grow curious. What do curious people do? They find out more! B&B spoilers say Liam may not get anywhere by talking to the secret gang, but could a clue from their conversation put him on the right track? Perhaps something about Catalina Island could come up during this exchange.

It’s easy to imagine Zoe Buckingham (Kiara Barnes), Florence “Flo” Fulton (Katrina Bowden) or Xander Avant (Adain Bradley) mentioning the spot of Beth’s birth. That could lead Liam to start digging around. He could listen in on more chats and even try to get in touch with Reese Buckingham (Wayne Brady) or the clinic itself.

Liam may begin to have nagging doubts about that night. Could he somehow cross paths with the other birth mom – the mother of the deceased baby they were given? That’s one possibility to consider. There’s also a chance Liam will look into Flo’s background. He might overhear something that lets him know something’s not quite right when it comes to her own birth mom status.

What’ll happen if Liam proves Flo never gave birth? She’d have a lot of explaining to do! Whatever the case, The Bold and the Beautiful spoilers say Liam could be on the verge of a much bigger discovery. Will Liam’s efforts lead to the revelation that “Phoebe Forrester” (River Davidson and Madeline Valdez) is actually Beth – will this mean Steffy loses Phoebe?

Hope Logan (Annika Noelle) and Steffy Forrester (Jacqueline MacInnes Wood) will face a serious shocker – and it may be due to Liam’s determination. We’ll give you updates as other B&B news comes in. Stay tuned to the CBS soap and don’t forget to check CDL often for the latest Bold and the Beautiful spoilers, updates and news.