BY hellodrdavis on June 19, 2019 | Comments: one comment
Related : Soap Opera, Spoiler, Television, The Bold and the Beautiful 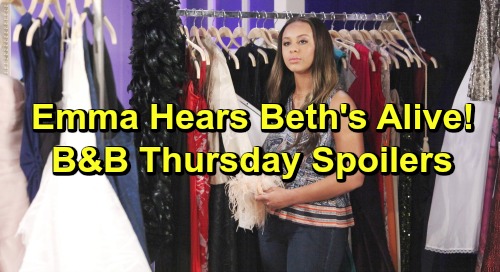 The Bold and the Beautiful spoilers for Thursday, June 20, tease that it will be an episode full of heated confrontations and major drama. First off, Brooke Forrester (Katherine Kelly Lang) will decide that she’s had about enough of Thomas Forrester’s (Matthew Atkinson) behavior. Brooke has recently noticed Thomas’ intensity around her daughter Hope Logan (Annika Noelle), and she doesn’t like it.

As B&B viewers know, Brooke is still holding out hope that her daughter will change her mind about ending her marriage to Liam Spencer (Scott Clifton), and she see how Thomas is helping to prevent that from happening. Plus, Brooke thinks that Thomas is obsessed with Hope, which he certainly is.

On Thursday’s episode of B&B, look for Brooke to confront Thomas about his behavior toward Hope. Perhaps Brooke will witness Thomas interacting with Hope and she won’t like it. Thomas has been getting pretty forward and controlling with Hope lately, and its looks like Brooke will get another whiff of his behavior and decide to say something.

But according to B&B spoilers, Thomas isn’t going to back down to Brooke. After all, he hasn’t backed down to anyone else, so why should he start now? Instead, he’ll reiterate his same song and dance about wanting to make a good life for Hope and about how he just wants her to be happy…with him.

Of course, Brooke won’t have a good reaction to this, and she’ll probably call Thomas out on his selfish desires. She may point out that Thomas really just wants what’s best for himself and Douglas Forrester (Henry Joseph Samiri), despite the consequences for Hope and Liam.

But don’t expect Thomas to cave in response to Brooke’s words. Thomas seems to only get more emblazoned in the face of adversity, so Brooke’s actions may actually egg Thomas on more!

Meanwhile, on Thursday’s new episode of B&B, June 20, Thomas will have yet another run-in with Zoe Buckingham (Kiara Barnes) and Xander Avant (Adain Bradley), and a big argument will ensue. As B&B viewers know, Emma Barber (Nia Sioux) just overheard Zoe and Xander discussing the big secret about Hope and Liam’s daughter being alive.

And it certainly doesn’t look like Emma’s going to be willing to keep the secret, even for a hot minute. Emma has a strong moral compass, and she feels a great deal of respect and admiration for both Hope and Liam. She’ll likely threaten to spill the whole truth, and that will leave Xander and Zoe panicked.

Well, it looks like Thomas will quickly be apprised of the urgent situation by Zoe and Xander, and this is likely what they will argue about. Exactly what happens next remains to be seen, but it sure looks like Emma is going meet a terrible fate. Viewers will have to wait to see how it all transpires from here.

Obsession turns deadly this week on #BoldandBeautiful, and someone’s going down. 💥 Don’t miss what happens! pic.twitter.com/mmGhbWkZIF