BY Heather Hughes on June 6, 2019 | Comments: one comment
Related : Soap Opera, Spoiler, Television, The Bold and the Beautiful 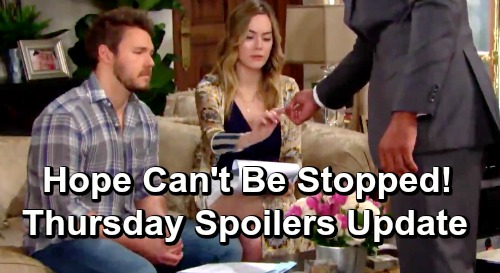 The Bold and the Beautiful (B&B) spoilers update for Thursday, June 6, tease that Liam Spencer (Scott Clifton) will fly off the handle. The sight of Thomas Forrester (Matthew Atkinson) alone is enough to ignite his rage. Liam hates watching Hope Spencer (Annika Noelle) suffer and that’s a big reason why he’s agreed to throw in the towel. If an annulment brings Hope peace, he can’t stand in the way of that.

Of course, that doesn’t mean Liam approves of Thomas’ manipulation. He believes Thomas is self-centered and controlling, so he’ll be sure to let him know in Thursday’s episode. Liam will contend that Thomas doesn’t really care about Hope and Steffy Forrester’s (Jacqueline MacInnes Wood) well-being. This isn’t about the kids either as far as Liam’s concerned; it’s only about what Thomas wants.

Thomas will maintain that Hope is simply doing what’s best for Kelly Spencer (Zoe Pennington and Chloe Teperman), “Phoebe Forrester” (River Davidson and Madeline Valdez) and Douglas Forrester (Henry Joseph Samiri). If the adults involved end up better off, Thomas won’t think that’s a bad thing. He may urge Liam to reunite with Steffy, raise the girls together and just be happy it all worked out. 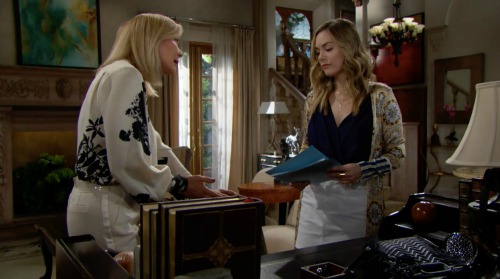 However, Liam’s right for the most part. Thomas does want a fill-in mom for Douglas, but this is really about securing a romance with Hope. The Bold and the Beautiful spoilers say Thomas will keep pushing his own agenda, but Liam obviously won’t approve. Nevertheless, Liam will ultimately have to settle down and get used to a Hope-less future. It’ll break his heart, but there’s nothing he can do.

Brooke Forrester (Katherine Kelly Lang), on the other hand, won’t be ready to give up yet. Her intuition will tell her something’s off about all this. Brooke won’t know exactly what it is, but she’ll sense that “Lope” should hang on. Perhaps she’ll feel like better days are ahead – which could certainly be true after Beth Spencer’s survival is exposed.

Plus, Brooke realizes Hope and Liam are still in love. She’ll think that’s a good enough reason to hold off on the annulment, but it won’t be for Hope. B&B fans can expect Hope’s plan to move forward. The papers are ready to be signed, so Hope will stick to her decision and ignore Brooke’s emotional plea.