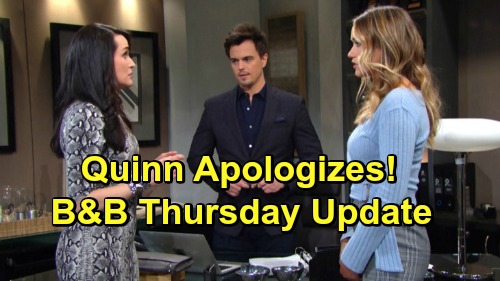 B&B fans know Quinn tends to cross the line when it comes to her son’s love life. She’s actually settled down lately, but it looks like she may fall back into old habits. Now that Flo’s around, Quinn could easily become a meddling mom again. For the time being, Wyatt will insist on an apology. He’ll refuse to let this go until his mother tells Sally she’s sorry, so Quinn will do what she’s told.

Of course, Quinn’s apology won’t be genuine. She fully believes Flo is Wyatt’s ideal match, so she’ll just be saying what Wyatt wants to hear. Sally should pick up on the insincerity and grow concerned. She was once quite secure in her relationship with Wyatt, but Quinn could fuel some fears in the coming weeks. That’s especially true since “Wally” is about to face a rough patch.

The Bold and the Beautiful spoilers say Sally will fill Wyatt in on Ridge Forrester’s (Thorsten Kaye) offer. If she stays on board at Forrester Creations, there’s a sweet deal on the table. Ridge is willing to keep the Spectra name on Sally’s line and give her the credit she deserves.

Although Wyatt worked hard to lock in a different deal with Bill Spencer (Don Diamont), “Dollar Bill” wants the Spencer name to get all the glory. However, Wyatt may not see why that’s such a huge thing for Sally. He’ll move past the shock of this offer and become irritated with Sally for considering it.

Sally will insist there’d be other benefits to sticking with FC. She’ll go down the list, but Wyatt will remain upset. He’ll feel like Sally’s ditching the future they planned, but she won’t see it that way. Sally will simply view this as a complicated business dilemma. She’s still in love with Wyatt and wants to build a life with him, but she has to decide what’s right for her own career.