BY Heather Hughes on March 7, 2019 | Comments: one comment
Related : Soap Opera, Spoiler, Television, The Bold and the Beautiful 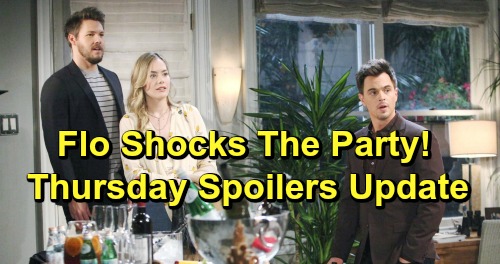 The Bold and the Beautiful (B&B) spoilers for Thursday, March 7, tease that Zoe Buckingham (Kiara Barnes) will focus on something else for a change. She’s been wrapped up in plenty of baby drama, so she’ll give herself a break and get cozy with Xander Avant (Adain Bradley). They’ll enjoy some steamy couple time as well as a deep discussion.

Zoe was a seemingly crazy schemer when she first debuted, but she’s mellowed since then. Xander realizes they’re better together, so he’ll talk to Zoe about that on Thursday. They’ll be glad they found their way back to each other and can have this romantic bliss. Of course, their bubble could burst if Xander finds out Zoe’s keeping a grieving mom from her own child.

Zoe was reluctant to keep Dr. Reese Buckingham’s (Wayne Brady) secret, but she now feels she must. She doesn’t want her dad to end up in prison, so she has to keep an eye on his partner in crime. Unfortunately, Zoe’s latest break will give Florence “Flo” Fulton (Katrina Bowden) a chance to cause more drama.

The Bold and the Beautiful spoilers say Flo will be on edge at Wyatt Spencer’s (Darin Brooks) dinner party. She’ll meet Sally Spectra (Courtney Hope), who’ll be eager to learn more about Wyatt’s former flame. However, Sally won’t be the one who leaves Flo feeling nervous. That would be Hope Spencer (Annika Noelle)!

Hope will catch up with Flo again and talk about how great it was to meet her. She’ll pile on the guilt as she opens up about her loss and how much joy “Phoebe Forrester” (Isabella de Armas and Redford Prindiville) has brought to her life. Flo will suggest that Hope shouldn’t give up on a family of her own. As her Beth Spencer remorse revs up, Flo will push Hope to try for another baby someday.

Naturally, Wyatt will be taken aback by the “birth mom” news. Flo noted that kids never happened for her, so Wyatt will feel misled. Once she’s on hot seat, Flo can suggest “Phoebe” isn’t hers to claim. She can contend that this little girl was always meant for a different mom.

That’s true since “Phoebe” is actually Hope’s daughter. She’s currently being raised by Steffy Forrester (Jacqueline MacInnes Wood), so it works both ways. Nevertheless, B&B spoilers say Flo will reach her breaking point by the end of the night. She just won’t know if she can keep up this ruse anymore.

As Wyatt, Sally, Hope and Liam Spencer (Scott Clifton) look on in confusion, Flo will struggle to tell them something. Hope will offer encouragement, so Flo will insist it’s about the baby. She’ll be on the verge of coming clean, but don’t expect a full confession. This is another Bold and the Beautiful fake-out, but it’ll provide some fun scenes anyway.

It sounds like an exciting episode’s coming up. We’ll give you updates B&B details emerge. Stay tuned to the CBS soap and don’t forget to check CDL often for the latest Bold and the Beautiful spoilers, updates and news.