The Bold and the Beautiful Spoilers: Thursday, May 9 – Liam Confronts A Stunned Thomas – Flo Feels Like A Hypocrite

BY hellodrdavis on May 8, 2019 | Comments: Leave Comments
Related : Soap Opera, Spoiler, Television, The Bold and the Beautiful 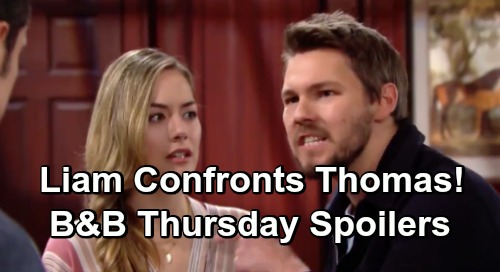 The Bold and the Beautiful spoilers for Thursday, May 9, tease that Liam Spencer (Scott Clifton) will return from his trip to Paris in a big way. He hopped on the first plane back to Los Angeles after hearing all about Thomas Forrester’s (Matthew Atkinson) plot to break up his marriage to Hope Spencer (Annika Noelle). Liam was peeved and plans on setting Thomas straight.

But first, Liam will probably want to check in on Hope. According to B&B spoilers, Liam will head directly to Forrester Creations, where Hope will be hard at work on her line. He’ll be naturally concerned about her, since he heard from Wyatt Spencer (Darin Brooks) that Thomas was making moves on Hope and playing on her insecurities about their marriage.

Liam and Hope will have their reunion, but soon an unsuspecting Thomas will show up in the office, and Liam will unleash his fury. The Bold and the Beautiful viewers can expect Liam to seriously lash out with some harsh words and ultimatums about leaving his wife alone.

Meanwhile, on the new episode of B&B on Thursday, May 9, Florence “Flo” Fulton (Katrina Bowden) will get some unsettling news. She’ll visit with Wyatt and will learn that he and Sally Spectra (Courtney Hope) have ended their relationship. But it’s why Wyatt and Sally ended things that will give Flo pause and strike fear in her heart.

To Flo’s horror, she’ll hear from Wyatt that he couldn’t go forward with Sally any longer because of a terrible secret that Sally kept from him. Flo will learn all about how Sally concealed the fact that Thomas was plotting to break up Hope and Liam’s marriage from Wyatt. Wyatt will seem utterly disgusted with Sally, and that will seriously worry Flo.

Of course, B&B viewers know that Flo is keeping a mammoth secret compared to the one that Sally kept. Flo knows that Hope’s daughter didn’t actually die on Catalina Island, and that she was kidnapped by Reese Buckingham (Wayne Brady) and then adopted to Steffy Forrester (Jacqueline MacInnes Wood).

As Flo is comforting Wyatt and letting him vent about Sally, she’ll feel increasingly guilty about her own secret. The Bold and the Beautiful spoilers say that she’ll start to feel like a big hypocrite, and she’ll realize that if Wyatt ever finds out what she knows, then he’ll surely want nothing to do with her.