BY Heather Hughes on May 9, 2019 | Comments: Leave Comments
Related : Soap Opera, Spoiler, Television, The Bold and the Beautiful 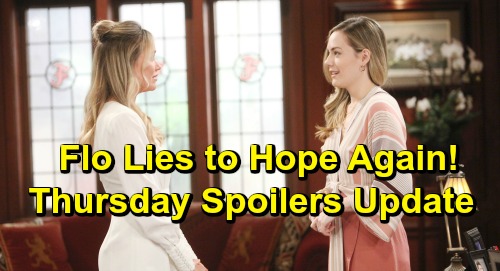 The Bold and the Beautiful (B&B) spoilers for Thursday, May 9, tease that Liam Spencer (Scott Clifton) will be on a mission. As soon as he heard Thomas Forrester (Matthew Atkinson) was making moves on Hope Spencer (Annika Noelle), Liam caught the first flight home. He’s not going to let Thomas just swoop in and steal his wife!

Hope has been an emotional wreck ever since she lost Beth Spencer, so Liam undoubtedly feels like Thomas is taking advantage of that. B&B fans can expect quite a confrontation when Liam corners his rival. He’ll wonder what Thomas thinks he’s doing. Hope is a married woman, so Liam certainly won’t appreciate the way Thomas is pursuing her. He’ll put his foot down and insist it’s just not right.

Thomas will be surprised by Liam’s fierce outburst and rapid response time. However, he won’t let it discourage him from what he really wants. It’s clear that Thomas’ love for Hope is more of an obsession. He’ll remain determined to fight for Hope and win her heart in the end. Thomas won’t think Liam stands a chance against destiny, but Liam will do whatever he can to protect his marriage.

Other Bold and the Beautiful spoilers say Wyatt Spencer (Darin Brooks) will confide in Florence “Flo” Fulton (Katrina Bowden). He’ll give Flo updates on his recent fight with Sally Spectra (Courtney Hope), which resulted in Sally moving out of the house. Wyatt will admit it was hard to see Sally go, but the trust between them has been shattered. He’ll tell Flo about Sally’s actions and add to her intense guilt.

Wyatt will note that the secret Sally was keeping for Thomas could’ve hurt Liam and Hope deeply. These are two people Wyatt truly cares about, including his brother and the ex he lost a child with. Wyatt won’t get how Sally could deceive him about something that affects the people he loves.

Of course, Flo’s keeping an even bigger secret that involves Hope and Liam. She helped Dr. Reese Buckingham (Wayne Brady) with his adoption scam, so she knows “Phoebe Forrester” (Isabella de Armas Rosalind Aune) is actually Beth. Despite Flo’s growing remorse, she’ll choose to keep her mouth shut and let Wyatt think she’s the good person she seems to be.