BY hellodrdavis on November 13, 2019 | Comments: one comment
Related : Soap Opera, Spoiler, Television, The Bold and the Beautiful 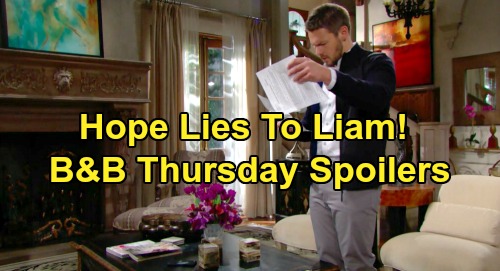 The Bold and the Beautiful spoilers for Thursday, November 14, tease that Ridge Forrester (Thorsten Kaye) will be busy fussing with a dress on one of the Forrester models when Steffy Forrester (Jacqueline MacInnes Wood) arrives. Ridge will reveal that it’s Thomas Forrester’s (Matthew Atkinson) design. Ridge and Steffy will then discuss Thomas, wondering why he wasn’t there for the fitting.

As it turns out, neither Ridge nor Steffy will have heard from Thomas, and Ridge will relay that he didn’t see him or Douglas Forrester (Henry Joseph Samiri) at the Forrester mansion this morning, but Ridge later learned that Douglas was at school today.

Charlie Webber (Dick Christie) and Jack Maclaine (Todd McKee) will then arrive and ask Ridge and Steffy to accompany them to the storage area. Charlie and Jack will explain that the hazard team is cleaning the vats, and that they should be finished soon. There will be a discussion of the deadly acid, and Ridge will remark that he doesn’t want anyone getting hurt.

Once they’re back in the CEO office, Ridge will reassure Steffy, who’s concerned about the safety of the situation in the storage area. They’ll discuss Thomas once again, and Ridge will voice his concern that Hope Logan (Annika Noelle) will push him until he signs the adoption paperwork. He’ll then leave Thomas a phone message.

Meanwhile, on the new episode of B&B on Thursday, November 14, at Brooke Forrester’s (Katherine Kelly Lang) mansion, Hope will still be reeling from her memories of Thomas falling into the vat of acid, and she’ll try texting Thomas again. Afterwards, Brooke will arrive, and Hope will be distraught thinking that she killed Thomas.

Liam Spencer (Scott Clifton) will then arrive and announce that Beth Spencer (River Davidson and Madeline Valdez) is with the babysitter. He’ll notice that something’s off with Hope and will want to know what’s going on, and he’ll mention that he wants to know what happened with Thomas last night.

He’ll be shocked when Hope tells him that Thomas signed the adoption papers and that she now has shared custody of Douglas. Liam will be floored that she managed to find a way to get Douglas away from Thomas, and he’ll state that this development changes thing for all of them now, since Thomas will always be a part of their lives.

Liam will then let Hope and Brooke know that he’s leaving Forrester Creations to go work for his father at Spencer Publications, but that he’s now worried about Thomas stalking her at Forrester when he’s not there. Brooke will offer reassurance and will ask him to relay to Bill that they’re happy about the change. Liam will wonder if Hope’s really ok, but eventually he’ll leave.

After Liam’s gone, Hope will tell Brooke that she can’t lie to Liam, and she’ll reiterate that Thomas is dead and she’s responsible for it. Brooke will tell her that they’ll get through this, but Hope will think that Douglas may never forgive her. Brooke will remind Hope that she was only trying to protect Douglas and that what Thomas did was sick.

Hope will wonder how everything went so wrong, and she’ll relive the events of the previous night before once again breaking down. Brooke will note that they need to figure out what to do now, and Hope will conclude that she needs to confess what happened to Ridge.