The Bold and the Beautiful Spoilers: Thursday, October 17 – Thomas & Zoe’s Encounter – Steffy Gets Honest With Liam About Feelings 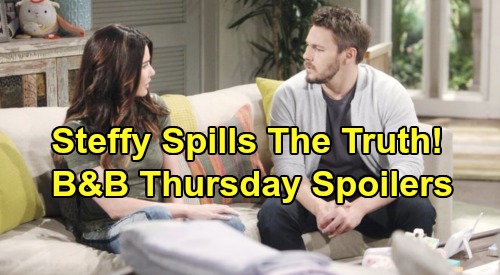 The Bold and the Beautiful spoilers for Thursday, October 17, tease that Thomas Forrester (Matthew Atkinson) will get a surprise. As B&B viewers know, he’s been living at his buddy Vinny Walker’s (Joe LoCicero) apartment since the big reveal about Beth Spencer (River Davidson and Madeline Valdez) occurred. Well, on Thursday’s episode, he’ll run into a familiar face there…Zoe Buckingham (Kiara Barnes).

Zoe might be visiting someone at the apartment complex, or she might be living at the same complex as Vinny. Either way, she’ll probably be quite surprised to see Thomas there and she probably won’t want to give him the time of day. After all, he previously threatened her into keeping the secret about Beth, plus she’s had her doubts about Thomas’ involvement in Emma Barber’s (Nia Sioux) fatal car accident.

At any rate, Thomas will get updates from Zoe about her current status. As B&B viewers know, Zoe was fired from Forrester Creations after her involvement in keeping Beth from Hope Logan (Annika Noelle) came to light. According to B&B spoilers, Zoe will share what she’s doing now and how she’s making ends meet.

It appears that Thomas will take a particular interest in Zoe, and ongoing B&B spoilers indicate that he may be planning to bring Zoe back to Forrester Creations eventually. Down the line, he’ll share with Zoe that she’s the inspiration for many of his designs – viewers will remember that she was a model for Forrester Creations and for a while had considerable media attention on her.

Since Thomas is plotting a comeback for himself at Forrester Creations, he may think that getting top modeling talent – especially someone gorgeous like Zoe to show off his cutting-edge designs – is a good idea. And so it may fortuitous for both Thomas and Zoe that they have bumped into each other again.

Meanwhile, on the new episode of B&B on Thursday, October 17, Liam Spencer (Scott Clifton) will make an unexpected and bold move. He’ll bring Beth to visit with Steffy Forrester (Jacquline MacInnes Wood) at the cliff house, and it will be a secret visit, unknown to Hope. While Liam has been thrilled to get his daughter back and he’s been overjoyed to see Hope get reunited with Beth, he realizes how difficult the whole situation has been on Steffy.

Liam knows that Steffy was utterly devastated when he and Hope took Beth from her home. Steffy may not have given birth to Beth, but she loved her as “Phoebe Forrester” with all of her heart, just as if she had given birth to her herself. It was a terrible and sudden loss for Steffy, and Liam knows that the separation from the little girl that she thought was her daughter has been tough.

Steffy will no doubt enjoy her visit with Beth, and she’ll be grateful to Liam for the visit. And while the two are alone with Beth, they’ll get to talking, and B&B spoilers say that Steffy will open up and get brutally honest with Liam. She’ll lament about the family that they could have had together. Of course, that dream has ended, now that Liam has gone back to Hope and plans to be a full-time dad to Beth.

But Steffy won’t hold back, and according to B&B spoilers, she’ll even wonder aloud if it’s possible that they could “do this again.” Of course, Steffy’s not one to harbor false hope when she knows that Liam and Hope are back together, so she’ll probably not be too serious about the prospect of getting back together with Liam and becoming a family again. Still, she’ll be honest with Liam and express her disappointment with how things have turned out.