BY hellodrdavis on October 30, 2019 | Comments: one comment
Related : Soap Opera, Spoiler, Television, The Bold and the Beautiful 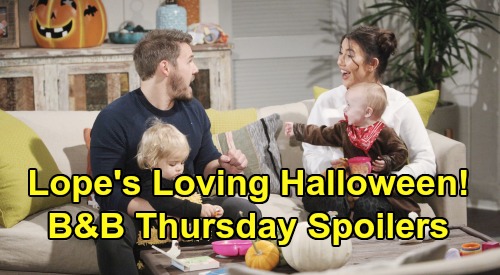 The Bold and the Beautiful spoilers for Thursday, October 31, tease that the Halloween festivities will get underway. As B&B viewers know, Hope Logan (Annika Noelle) accepted Douglas Forrester’s (Henry Joseph Samiri) invitation to attend the Forrester Halloween soiree that will be given by Eric Forrester (John McCook) and Quinn Forrester (Rena Sofer). She of course wants to be there for Douglas, but she also has an ulterior motive in attending.

Hope now has a sneaky new mission, and that’s to get Thomas Forrester (Matthew Atkinson) to allow her to adopt Douglas and share joint custody with him. As she explained to Brooke Forrester (Katherine Kelly Lang), under California law, Hope could adopt Douglas without usurping Thomas’ parental rights. If Thomas agreed to the situation, then both he and Hope would be legal parents of Douglas.

As far as Hope’s concerned, that situation would work for the time being, as it would keep her in Douglas’ life, and it would give her the legal standing she’d need to later file for sole custody. Of course, her end game will be to take Douglas away from Thomas permanently, but for now she’ll need to be extra nice to Thomas and convince him to allow her to adopt Douglas.

So, Hope will attend the Halloween party, and while there she’ll plan to manipulate Thomas by being nice and perhaps a little flirty with him, as well as showing him how much Douglas loves and needs her. According to ongoing B&B spoilers, it will eventually turn into a dangerous plan, but it seems that for the night of the party, things should remain lighthearted and fun for Douglas’ sake.

Meanwhile, on the new episode of B&B on Thursday, October 31, Liam Spencer (Scott Clifton) will reconnect with Steffy Forrester (Jacqueline MacInnes Wood) in an important way. He’ll head to Steffy’s house with Beth Spencer (River Davidson and Madeline Valdez) while Hope’s busy at the Forrester Halloween party with Douglas and Thomas. Liam will want his daughters to spend the holiday together, and without Hope in the picture, that will leave Steffy and Liam alone with Beth and Kelly Spencer (Zoe Pennington).

According to The Bold and the Beautiful spoilers, Liam, Steffy, and the girls will have a great time together. The girls will play and enjoy Halloween as best as they can understand it, and Liam and Steffy will get some bonding time in as well. It looks like by the end of the evening they’ll be feeling pretty grateful for what they share together. They’ll marvel at Kelly and Beth together and will be glad that the sisters are getting to spend Beth’s first Halloween as a pair.

Of course, Steffy will probably be quite thankful that she’s even able to partake in Beth’s first Halloween, since for a while there it seemed that Hope was keeping Beth far away from her. Steffy will probably share her thanks with Liam for the evening, and it looks like he’ll feel good about the evening too, despite the fact that Hope is absent. Of course, he probably would have preferred for them all to be together as a blended/extended family, but still he’ll revel in his time with Steffy.