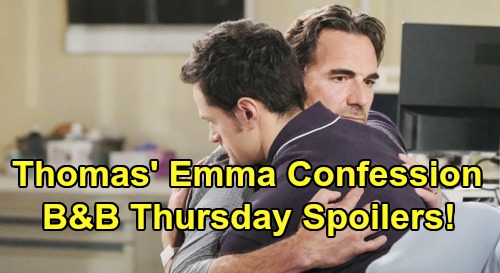 The Bold and the Beautiful spoilers for Thursday, September 5, tease that Ridge Forrester (Thorsten Kaye) will find himself seriously upset by the direction that things are going against his son Thomas Forrester (Matthew Atkinson). As B&B viewers know, he’s just had a couple of tense conversations – one with Flo Fulton (Katrina Bowden) and one with Bill Spencer (Don Diamont), and the issue of Thomas’ involvement in Emma Barber’s (Nia Sioux) death came up in both.

And that has left Ridge deeply worried about what Thomas might face down the road. It’s one thing if Thomas lied and manipulated Hope Logan (Annika Noelle) into a loveless marriage, but if Thomas is responsible for someone’s death, then he could be facing some serious legal charges and possibly jail time. Ridge just doesn’t want to believe that his son could have done something so horrible as to cause or heavily contribute to Emma’s death.

Right now, Ridge is in serious denial, and he’s rejecting both Flo and Bill’s accusations against Thomas where Emma’s fatal accident is concerned. But on Thursday’s episode, Ridge will find himself forced to face the possibility square in the face. According to B&B spoilers, Detective Alex Sanchez (Jeremy Ray Valdez) will be back on the scene and he’ll once again bring up Thomas and his possible involvement in Emma’s death.

Of course, from Ridge’s standpoint, now isn’t the time for Detective Sanchez to come around asking questions. After all, Thomas has just awakened from his post-fall coma. But it doesn’t look like Detective Sanchez will be willing to wait, and he may want to talk to Thomas asap. We’ll see if Ridge is able to hold off Detective Sanchez and his questions for Thomas.

At any rate, ongoing B&B spoilers indicate that Ridge will soon learn exactly what happened between Emma and Thomas, and he’ll hear it from Thomas directly. Chances are, this conversation will occur in private and not in front of Detective Sanchez, but we’ll have to wait to see how it all plays out. Finally, Ridge will hear the truth, and he won’t at all like what he hears.

Of course, as B&B viewers know, Thomas was directly involved in Emma’s fatal car accident. From everything that B&B viewers have been shown, Thomas was chasing Emma in his car and distracting her from the road. That, in addition to Emma’s texting and driving, appeared to contribute to her accident. And then Thomas stopped at the scene of the accident without offering Emma any assistance or calling 911.

It will be tough for Ridge to hear those details, and at that point he’ll realize that his son is in a lot of trouble, and if he wasn’t sufficiently worried about Detective Sanchez’s questions before, he certainly will be after hearing Thomas’ account of the accident.

Meanwhile, on the new episode of B&B on Thursday, September 5, Brooke Forrester (Katherine Kelly Lang) will get some love and support from her sisters in her time of need. As B&B viewers know, Brooke has had a terrible time lately. Ever since Thomas’ fall off the cliff at Steffy Forrester’s (Jacqueline MacInnes Wood) house, Ridge has blamed her for the accident. The two just can’t see eye-to-eye on what happened.

So, Katie Logan (Heather Tom) and Donna Logan (Jennifer Gareis) will come together and offer their sister their emotional support. Brooke has never felt farther apart from Ridge than she does right now, and she’s really hurting over it. Plus, she’s worried that Thomas is still trying to manipulate Hope, and she doesn’t want to see him hurt anyone else that she loves. She believes wholeheartedly that Thomas is still dangerous, and she knows that this will put her at odds with Ridge down the line.

Katie and Donna will offer their comfort to Brooke, and they’ll certainly side with their sister on the issue of Thomas. The Logan sisters are a tight-knit group, and they’re always there for each other. Expect some emotional scenes as Brooke continues to vent and express her frustration about Ridge and Thomas.