BY Heather Hughes on May 2, 2019 | Comments: one comment
Related : Soap Opera, Spoiler, Television, The Bold and the Beautiful 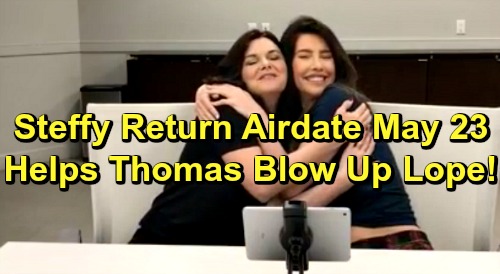 The Bold and the Beautiful (B&B) spoilers tease that Steffy Forrester (Jacqueline MacInnes Wood) will get some shocking news. Since Jacqueline MacInnes Wood is set to hit the screen again on a new B&B episode May 23, it won’t be long until Steffy gets back in the action. There’s a good chance Steffy will have some harsh words for her Thomas Forrester (Matthew Atkinson) once he returns to LA!

Thomas has never been a shining example of how to treat women, but he’s become a bit of a predator at this point. He’s pushy, disturbing and just plain out of control. The Bold and the Beautiful spoilers say word of Thomas’ scheme will travel fast. After Sally Spectra (Courtney Hope) spills the truth to Wyatt Spencer (Darin Brooks), he’ll likely fill Liam in.

Liam will quickly make his way back to Hope to defend her from Thomas’ advances. He’ll be a little late since Thomas will have already planted a kiss by then, but better late than never! Liam may end up explaining the situation to Steffy as well. He’ll need an explanation for leaving so quickly, so it makes sense that he’ll be honest and blame Steffy’s twisted brother.

Steffy should be appalled when she hears what Thomas has been up to. The whole point of her leaving town was for Liam and Hope to heal without distractions. Of course, Steffy will get that Thomas suffered a great loss when Caroline Spencer (Linsey Godfrey) died, even though they weren’t together. She’ll also understand why Thomas would want a mother for Douglas Forrester (Henry Joseph Samiri).

However, Steffy probably won’t think any of that justifies pursuing Hope like this. Hope’s married and has been struggling with grief for quite some time. She doesn’t deserve to be treated like some conquest and manipulated by her ex.

Since storylines tend to move slowly on B&B, it seems likely that Thomas will still be after Hope once Steffy comes home. Steffy will undoubtedly chew him out, but Thomas may think this is the perfect time for some sibling team work. The Bold and the Beautiful fans know Steffy still has feelings for Liam, so Thomas may be able to exploit those.

Will Thomas want Steffy to get in on this plot? He may need a different strategy after his current ones blows up, so Steffy luring Liam back to her would be an easy one. It’s just a matter of whether or not Steffy would agree. If Steffy decides she wants Liam bad enough, it wouldn’t be out of the question.

Regardless, Thomas may at least try to join forces with Steffy on this. He believes they can all be happy if everyone just makes the right choices – HIS choices! We’ll give you updates as other B&B details emerge. Stay tuned to the CBS soap and don’t forget to check CDL often for the latest Bold and the Beautiful spoilers, updates and news.