BY Heather Hughes on April 16, 2019 | Comments: one comment
Related : Soap Opera, Spoiler, Television, The Bold and the Beautiful 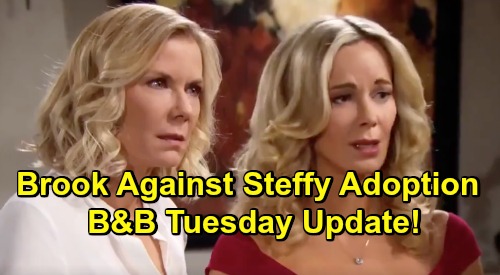 The Bold and the Beautiful (B&B) spoilers for Tuesday, April 16, tease that Florence “Flo” Fulton (Katrina Bowden) will be in a tight spot. Hope Spencer (Annika Noelle) just blabbed about Flo’s daughter, who isn’t really her daughter at all. Flo simply posed as the birth mother and became part of Dr. Reese Buckingham’s (Wayne Brady) scheme, but she can’t blurt that out to Mama Hope!

However, Shauna Fulton (Katrina Bowden) knows Flo was never pregnant, so she’ll be adamant it’s just not true. She’ll push Flo to admit this is a lie or at least some sort of mistake. Shauna won’t get why Flo would claim she had a baby when she clearly didn’t, so Flo will have to cover her tracks. She’ll tell Hope that Shauna never knew about her pregnancy, so a surprised Hope will be apologetic.

Hope has a solid relationship with her own mom, Brooke Forrester (Katherine Kelly Lang). She feels comfortable opening up to Brooke about anything and everything, so she never dreamed Flo would’ve kept Shauna out of the loop. Hope will be sorry for making assumptions about their bond and gladly agree to give them some time to talk.

Once they’re alone, Shauna will demand the truth. She’ll wonder what the heck’s going on, but Flo won’t want to explain at first. Nevertheless, Shauna will eventually face the baby shocker. Flo will blurt out that the little girl she gave to Steffy Forrester (Jacqueline MacInnes Wood) actually belongs for Hope. She’ll likely stun Shauna with this news as Tuesday’s cliffhanger, so stay tuned.

Other Bold and the Beautiful spoilers say Hope and Brooke will have a serious discussion. As we mentioned, these two have an open and honest relationship. Unfortunately, Brooke will be a little too honest for Hope’s taste! B&B spoilers say Brooke will wonder if the latest Logan revelation could change things. She’ll hint that it might affect Flo’s decision to give up her baby for adoption.

Hope will insist that Brooke shouldn’t even go there. She’ll probably contend that the adoption is final and that’s that, but Brooke may not be satisfied. We all know how persistent she can be. Across town, Bill Spencer (Don Diamont) will discover something about Quinn Forrester (Rena Sofer). As he digs deeper, Bill will realize why Quinn is so tough on Wyatt Spencer’s (Darin Brooks) love interests.

Quinn tends to hold Wyatt’s women to ridiculously high standards – possibly because she could never live up to them herself. She’s made mistakes and hurt Wyatt over the years, so she just wants to protect him. Wyatt sometimes falls for ladies who have milder versions of Quinn’s qualities, which may be part of why she’s always so wary.

Regardless, Bill may soften toward Quinn once he understands her a bit better. They’re not going to suddenly be besties, but The Bold and the Beautiful spoilers say they may share nice moment. We’ll give you updates as other B&B details emerge. Stick with the CBS soap and don’t forget to check CDL often for the latest Bold and the Beautiful spoilers, updates, and news.