The Bold and the Beautiful Spoilers: Tuesday, August 27 – Ridge Accuses Brooke of Intentional Thomas Push – Liam Says He Deserved It 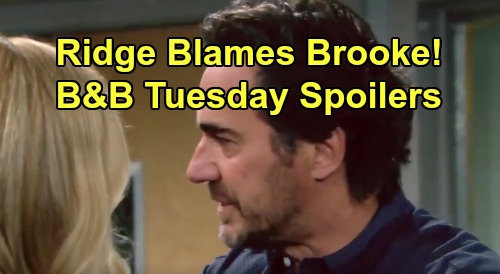 The Bold and the Beautiful spoilers for Tuesday, August 27, tease that Brooke Forrester (Katherine Kelly Lang) will be on the receiving end of a terrible accusation. As B&B viewers know, Ridge Forrester (Thorsten Kaye) has just confronted Brooke with what he saw at the cliff house. Ridge arrived on the scene just in time to see Brooke push Thomas Forrester (Matthew Atkinson) over the side of the cliff.

Now Ridge is terribly upset, and it looks like things will get even more intense on Tuesday’s B&B episode, as he insists that the push was intentional. Ridge knows just how much animosity Brooke had toward Thomas, and he is apparently thinking that Brooke decided to make a move to permanently put a stop to Thomas’ reign of terror over Hope.

Of course, B&B viewers know that it wasn’t quite that cut and dried. Brooke managed to get herself tangled up in the middle of Thomas and Hope Logan’s (Annika Noelle) argument while Thomas was begging Hope to go back inside the house to talk. She did push Thomas in a deliberate move, but she’ll surely argue that she did it to get Thomas to back off, not with the intention of pushing him over the cliff to his likely death.

Unfortunately for Brooke, it doesn’t look like Ridge is going to buy her story, and he’ll probably argue that Brooke didn’t need to push Thomas as hard as she did – there was clearly a lot of force there, since Thomas fell in the way that he did. And as Detective Alex Sanchez (Jeremy Ray Valdez) comes on the scene and starts asking questions, Ridge will probably tell what he saw, which won’t be good for Brooke.

And of course, none of this is going to bode well for Ridge and Brooke’s marriage, which was already strained due to Thomas’ role in the Beth Spencer (River Davidson and Madeline Valdez) secret. It’s hard to imagine Ridge forgiving Brooke for the push anytime soon, especially if Thomas ends up with serious ongoing injuries as a result of his fall.

Meanwhile, on the new episode of B&B on Tuesday, August 27, Liam Spencer (Scott Clifton) will comfort Hope as she reels from what happened on the cliff. She’s just been through a traumatic event, and she will be well-aware of the difficulties that her mother is going to face as a result of pushing Thomas and his fall over the cliff.

But it looks like Liam won’t have much sympathy for Thomas and his current predicament. Liam is still very upset with Thomas over keeping Beth from himself and Hope, and from manipulating Hope into a marriage all the while knowing that Beth was alive. Liam will still be reeling from Thomas’ actions, and he’ll find himself sympathizing with Brooke.

While Hope may think that Thomas wasn’t posing an actual danger to her at the side of the cliff, Liam will almost certainly think that he was. It appears that he will defend Brooke’s actions, realizing that she was only acting in order to protect her daughter from a dangerous man. Liam will share these thoughts with Hope and will try to convince her that Thomas got himself into his current situation.

Of course, whether Hope will agree remains to be seen. As she and Liam head to the hospital to check on Thomas’ condition, she’ll likely be having mixed feelings. And what will she end up telling Detective Sanchez? Her statement could be instrumental in determining whether Brooke ends up being prosecuted for attempted murder.