The Bold and the Beautiful Spoilers: Tuesday, August 6 – Lope Cry Tears of Joy Over Beth Reunion – Flo Spills All To Brooke & Ridge

BY hellodrdavis on August 5, 2019 | Comments: one comment
Related : Soap Opera, Spoiler, Television, The Bold and the Beautiful 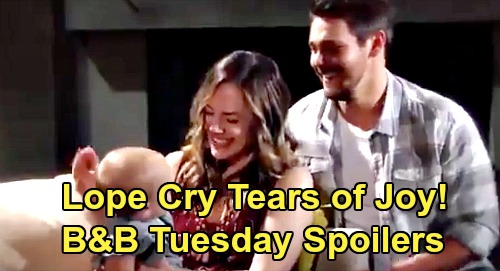 The Bold and the Beautiful spoilers for Tuesday, August 6, tease that Hope Forrester (Annika Noelle) and Liam Spencer (Scott Clifton) will experience some intense and joyous moments, and viewers will be right there to witness them. As B&B viewers know, Liam, Thomas Forrester (Matthew Atkinson), and Hope just had a major showdown at Forrester Creations, culminating in Hope finally realizing that Beth Spencer (River Davidson and Madeline Valdez) is alive.

Now that Thomas has fled and doesn’t pose an immediate threat to them, Hope and Liam will anxiously head to Steffy Forrester’s (Jacqueline MacInnes Wood), where they’ll finally both be reunited with their daughter. It looks like Steffy will be off-site at a doctor’s appointment with Kelly Spencer (Chloe Teperman and Zoe Pennington) when Hope and Liam arrive at the cliff house, with Tiffany (Maile Brady) watching “Phoebe Forrester.”

That will allow Hope and Liam to spend some quality time with their daughter and spend the first moments of their reunion in a Steffy-free zone. Look for some tender and emotional moments, as Hope, Liam, and Beth are finally reunited and come together as a family.

Meanwhile, on the new episode of B&B on Tuesday, August 6, Florence “Flo” Fulton (Katrina Bowden) will continue on her apology tour. She will wind up in front of Brooke Forrester (Katherine Kelly Lang) and Ridge Forrester (Thorsten Kaye) and confess that she never gave birth to “Phoebe.”

Ridge and Brooke will listen in horror as Flo recounts her tale from the beginning – how she got caught up in Reese Buckingham’s (Wayne Brady) baby switch and adoption scam, and how she knew from early on that the baby that she was pretending was hers was actually Beth Spencer.

Of course, this will quickly ring a bell for Ridge, who will be fresh from Steffy’s house, where Steffy was upset over Liam’s belief that Phoebe is Beth. The Bold and the Beautiful spoilers say Ridge will quickly put two and two together and realize that the “tale” that Douglas Forrester (Henry Joseph Samiri) was telling about Phoebe being Beth could actually be true…and he’s going to be absolutely floored.

Naturally, Brooke and Ridge will have lots of questions for Flo, but ultimately it looks like they’ll get the full picture and realize that the baby in question in Flo’s story is actually Hope and Liam’s daughter Beth. And that’s going to leave Brooke and Ridge both very angry with Flo.

But while they’ll be furious over the incredible story they’ve just heard, they’ll both feel driven to get to Steffy’s place immediately – but for very different reasons. Brooke will want to go see the baby that she now knows is her granddaughter and celebrate the happy reveal with Hope. But Ridge will realize that Steffy is going to be devastated, and he’ll want to race to her house to comfort her.

As for Flo, ongoing B&B spoilers indicate that Ridge and Brooke will deal with her later. Once the dust settles a bit, they’re going to have some choice words for not only Flo, but also for Shauna Fulton (Denise Richards) and Zoe Buckingham). But for the present moment, they’ll want to be there to support their children and wrap their heads around the incredible story they’ve heard from Flo.