The Bold and the Beautiful Spoilers: Tuesday, December 17 – Thomas Hatches Sneaky New Plan – Zoe’s On Board To Help Expose Thomas 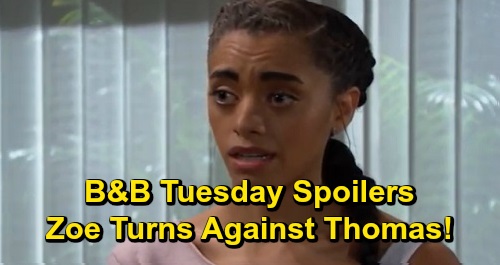 The Bold and the Beautiful spoilers for Tuesday, December 17, tease that Liam Spencer (Scott Clifton) will push forward with his big idea, trying to get both Steffy Forrester (Jacqueline MacInnes Wood) and Zoe Buckingham (Kiara Barnes) on board. As B&B viewers know, Liam thinks that Steffy should rehire Zoe at Forrester Creations, and that Zoe should secretly work for them to find out exactly what Thomas is up to when it comes to Hope Logan (Annika Noelle).

Of course, neither Steffy nor Zoe seem really keen on that idea at the moment, so it looks like Liam will have an uphill battle ahead of him as he tries to convince them both to get on board. Judging from Steffy’s reaction when Liam floated the idea of rehiring Zoe, it’s going to take a bit of convincing on Liam’s part with her for sure. Of course, Steffy’s still peeved at Zoe for keeping the Beth Spencer (River Davidson and Madeline Valdez) secret from them for all those months, so the thought of rehiring Zoe is a total no-go at the moment.

According to ongoing B&B spoilers, Steffy will eventually rehire Zoe at the fashion house, but it won’t take place right away. However, it does seem that Steffy and Liam will be successful in recruiting Zoe to help them expose Thomas’ true motives on Tuesday’s B&B episode. Zoe seemed very willing to do whatever it takes to get back into Steffy and Liam’s good graces, and so viewers can look for her to agree to help them get to the bottom of what Thomas is up to.

Meanwhile, on the new episode of B&B on Tuesday, December 17, Thomas will make a big change in his plot to get closer to Hope. As B&B viewers know, Thomas’ most recent tactic – to stage a fashion showdown in order to get Hope to agree to work with him on Hope For The Future – was a failure, since Hope turned him down flat. This was even after Thomas recruited Douglas Forrester (Henry Joseph Samiri) to help try to persuade Hope.

So Thomas will decide to switch tactics and do the unexpected…and it appears that his new tactic will involve Zoe. B&B spoilers indicate that Thomas will decide that perhaps Hope will accept him as her designer if she gets the impression that he’s no longer obsessed with her. And what better way to portray oneself as non-obsessed than to pretend to be interested in someone else?

According to B&B spoilers, Thomas will go to quite a bit of trouble to demonstrate for Hope that he’s now pursuing a romantic relationship with Zoe. He’ll even end up staging a romantic dinner for two that he’ll make sure Hope sees, and when she protests that his gesture (which she’ll think is for her) is inappropriate and out of line, he’ll announce that the whole setup isn’t even for her. It will all be part of Thomas’ plan to get Hope to let her guard down.

Of course, his ultimate goal will be for Hope to believe that he’s moved on, so that she’ll then feel more comfortable with the idea of teaming with him on Hope For The Future. It will all be a big ruse to get Hope to do what Thomas wants…again. And it will have to start somewhere, so B&B viewers can expect to see Thomas approach Zoe with some romance in mind. It’s not clear at this point just how much of his plan he’ll reveal to Zoe, or whether he’ll just let her think the romance is real.

But what Thomas won’t know is that Zoe is on board with Steffy and Liam, so while Thomas is appearing to romance her, she’ll be trying to get intel from him to feed to Steffy and Liam. It will be a risky game all the way around!