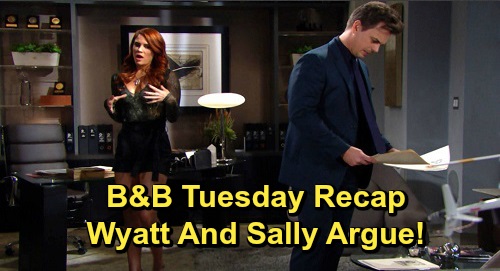 The Bold and the Beautiful spoilers recap for Tuesday, December 3, reveal that Quinn Forrester (Rena Sofer) arrived home to the Forrester mansion to see Shauna Fulton (Denise Richards) and Ridge Forrester (Thorsten Kaye) sitting in the living room talking softly. She quickly snuck up the stairs, then came back down after Ridge had left to grill Shauna about what, if anything, had happened between them.

Shauna revealed that she and Ridge hadn’t been intimate, and she and Quinn talked about how miracles do happen. Quinn urged Shauna to “go get Ridge” but she also cautioned her about Brooke Forrester (Katherine Kelly Lang) still being in the picture. Shauna indicated that she realized that no matter what, Brooke would always be the love of his life, but that she could be happy being “the love of the rest of his life.”

Meanwhile, Ridge went to Forrester Creations, where he talked with Eric Forrester (John McCook), who suggested that he take some time off from work to go work on his marriage to Brooke. Ridge then told his father that he didn’t think he had a marriage anymore. Eric noted that something seemed off about his attitude, and he wondered if Ridge was seeing someone.

Ridge then revealed that Shauna had been helping him through this difficult time, and Eric seemed to understand the attraction, although he wasn’t really happy about the fact that Ridge was sort of involved with another woman. Yet, Eric stated that he wasn’t a perfect husband to Stephanie Forrester (Susan Flannery), so he couldn’t judge. Eric ended the conversation by telling Ridge to try not to hurt Brooke and Shauna too much.

Next, over at Spencer Publications, Bill Spencer (Don Diamont) explained to Liam Spencer (Scott Clifton) that he wanted Liam to take over Ion Fashion, which Wyatt Spencer (Darin Brooks) had been working on. Liam quickly stated that he didn’t want to be Wyatt’s competition or take over something that was supposed to be Wyatt’s.

But Bill explained that Wyatt had been recently pitching another project and likely wouldn’t mind if Liam took over Ion Fashion. Bill, Liam, and Justin Barber (Aaron D. Spears) then talked a bit about Wyatt and why he hadn’t yet got Sally Spectra (Courtney Hope) a ring. Finally, Bill asked Liam to look out for his brother as he tried to navigate his engagement to Sally.

Finally, Wyatt and Sally argued about Sally’s slip when she called Wyatt by Liam’s name. Wyatt was really perturbed and basically accused Sally of still being in love with Liam. Sally said that at one point she thought she loved Liam, but that was a fleeting thing. Wyatt then wondered if Sally turned down his father’s job offer and stayed at Forrester Creations because Liam was there, which Sally completely denied.

Wyatt then went on about how he was done going after Liam’s women, and Sally responded adamantly that she was never Liam’s woman. She then called Wyatt out on being afraid that he was repeating a pattern that could hurt him, and she then suddenly suggested that they go to Vegas right then and there to get married.

Wyatt refused, saying that they weren’t going to get married just to prove something. Sally then said that the only thing she was trying to prove was that she loved him, and they seemed to make up, agreeing that they now know each other better. They then kissed and Sally stated that “We’re going to be ok…even if it kills me.”