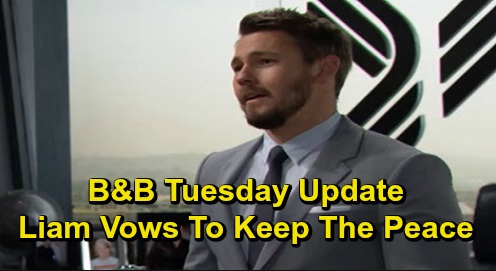 The Bold and the Beautiful (B&B) spoilers update for Tuesday, December 3, teases that Wyatt Spencer (Darin Brooks) will expect some answers from Sally Spectra (Courtney Hope). She just called Wyatt by his brother’s name, so that was certainly unsettling for the groom-to-be! Wyatt will worry that Sally’s still in love with Liam Spencer (Scott Clifton), which is why she’ll try to set the record straight.

Sally will confess that she had feelings for Liam once upon a time – a very dark time actually. She’ll admit that Liam was a source of light during the crisis, but that was then and this is now. Sally will make it crystal clear that she’s all in on her relationship with Wyatt. She’ll declare that Wyatt’s the sun, the moon and the stars for her.

Sally will beg Wyatt to believe he’s the only man she wants – and she’ll make a shocking suggestion to prove it. The Bold and the Beautiful spoilers say Sally will propose a quick wedding in Vegas. She’ll think they should get married right away to show Wyatt she doesn’t have a doubt in the world.

Wyatt won’t be on board with the elopement plan, but they’ll still manage to talk things out for now. B&B spoilers say Wyatt will want Sally to understand where he’s coming from. He’s tired of chasing after Liam’s women, and he refuses to do it anymore. Of course, Sally will insist that her Liam slipup was just that: a slipup. She’ll promise it was an innocent blunder and that Liam means nothing to her now.

Sally will be committed to getting rid of Wyatt’s insecurities. She’ll insist they’re going to be OK, even if it kills her! Meanwhile, Liam will talk to Bill Spencer (Don Diamont) about his duties at Spencer Publications. He’ll learn what projects he can tackle, but he won’t want to step on Wyatt’s toes. Liam will suggest he’s done going head to head with his brother – whether it be in business or in love.

Other Bold and the Beautiful spoilers say Ridge Forrester (Thorsten Kaye) will finish making out with Shauna Fulton (Denise Richards) and then head on his way. He’ll end up confiding in Eric Forrester (John McCook), who’ll be hopeful that Ridge can still work things out with Brooke Forrester (Katherine Kelly Lang).

After Ridge hints that he can do better, Eric will wonder why his son has such an attitude. He’ll guess that Ridge might have someone new in his life, so Ridge will admit he’s been hanging out with Shauna. The news will disappoint Eric, who’ll have some advice to pass along.

Eric will think back on his own interactions with other women and how they affected Stephanie Forrester (Susan Flannery). He just won’t want Ridge making things harder on Brooke than they have to be. Afterward, Ridge will spend some time fantasizing about Shauna. Brooke may still be in Ridge’s heart as his longtime love, but it’s Shauna that’ll fill his daydreams.

Back with Shauna, she’ll get grilled by Quinn Forrester (Rena Sofer). The Bold and the Beautiful spoilers say Quinn will catch a glimpse of Ridge and Shauna’s make-out session. She’ll want the full story once she’s alone with her bestie. Shauna will admit she’s gotten much closer to Ridge, who’s on the verge of divorcing Brooke.

Quinn will want Shauna to be careful since Brooke is the love of Ridge’s life, but Shauna will think there’s room for more than one. She may not be Ridge’s first love, but she’ll suggest she’s willing to be his last. Quinn will decide she approves of this match, so she’ll urge Shauna to continue her pursuit of Ridge. However, she’ll suspect Eric won’t agree since he’s the president of the Brooke fan club!