BY Heather Hughes on July 2, 2019 | Comments: one comment
Related : Soap Opera, Spoiler, Television, The Bold and the Beautiful 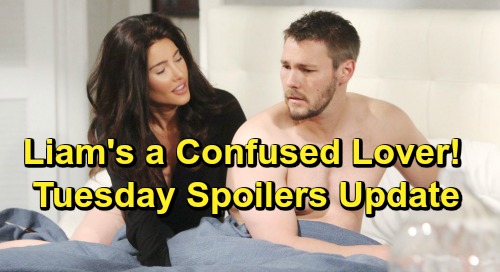 The Bold and the Beautiful (B&B) spoilers update for Tuesday, July 2, tease that Liam Spencer (Scott Clifton) will awaken in a fog. It’ll take a couple minutes to piece together what happened the night before, but everything will slowly come into focus. Liam will recall his bizarre behavior at the beach bash and how it affected those around him.

B&B fans know things took a passionate turn between Liam and Steffy Forrester (Jacueline MacInnes Wood). In the morning, Liam will remember making love to Steffy, and he won’t regret renewing their deep connection. However, Liam will express remorse over how he treated Hope Logan (Annika Noelle). He’ll feel like he made her pain worse, so he’ll kick himself for going overboard on the partying.

Liam won’t understand why he was acting so fun and carefree. He’ll hate that he was insensitive to Hope’s struggles, but Steffy will be there to offer comfort. The Bold and the Beautiful spoilers say Liam and Steffy will take a moment to address their relationship, too. They won’t jump right back into anything serious, but they’ll at least be glad they’re growing closer and strengthening their bond.

Over with Thomas Forrester (Matthew Atkinson), he’ll feel a sense of satisfaction. Thomas will be convinced phase one of his plan is complete. He’s inching Liam toward Steffy and pulling Hope away from her ex. It’ll be time to up the ante, so Thomas will turn to Douglas Forrester (Henry Joseph Samiri) for assistance. The Bold and the Beautiful spoilers say the next scheme involves a sneaky proposal.

Douglas will listen as his dad shares what’s in store. Thomas will talk about how much they love Hope and want her to be in their lives. He’ll insist Douglas can help them be a united family. After Thomas whips out the engagement ring, he’ll deliver some instructions. Douglas will realize he needs to ask Hope to marry Thomas and become his new mommy.

Of course, Thomas will want to keep his role as proposal coach under wraps. He’ll make sure Douglas acts like he’s doing this 100 percent on his own. Hope’s in for a huge shock later this week, so stay tuned. We’ll give you updates as other B&B news comes in. Stick with the CBS soap and don’t forget to check CDL often for the latest Bold and the Beautiful spoilers, updates and news.