The Bold and the Beautiful Spoilers: Thomas and Hope Bloody Wedding Shocker – Xander’s Plot to Stop Ceremony Ends in Disaster?

BY Heather Hughes on July 1, 2019 | Comments: one comment
Related : Soap Opera, Spoiler, Television, The Bold and the Beautiful 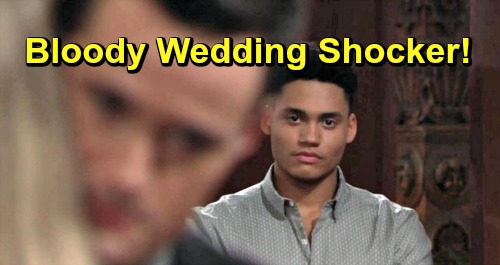 The Bold and the Beautiful (B&B) spoilers tease that Thomas Forrester (Matthew Atkinson) will feel like he’s on the verge of a perfect family. He’s been focused on winning over Hope Logan (Annika Noelle) for quite a while now, but he’ll finally see his dreams within reach. Thanks to Liam Spencer’s (Scott Clifton) sex session with Steffy Forrester (Jacqueline MacInnes Wood), Thomas will have yet another way to manipulate her.

After Liam confesses to Hope, she’ll undoubtedly lean on Thomas for support. Hope won’t know that Thomas is the one who set that lovemaking in motion! He drugged Liam and nudged the process along, but he’ll play dumb and act like “Steam” is meant to be. Thomas will push Hope to accept that they’re meant to be, too. He’ll emphasize Steffy and Liam’s bond so Hope will shut the door on her past.

Once Douglas Forrester (Henry Joseph Samiri) pops the question for his dad, Thomas will move forward with a proposal of his own. It won’t be hard to convince Hope since she’ll be so distraught over “Steam’s” reunion. She also won’t want to deny Douglas the family she wants, so she’ll suck it up and agree to be Thomas’ wife.

That means wedding plans will soon be underway, so Thomas will be on cloud nine. There’s just one problem – and his name’s Xander Avant (Adain Bradley)! During the week of July 8-12, The Bold and the Beautiful spoilers say Xander will uncover damning evidence against Thomas. It seems his mission to prove Thomas’ involvement in Emma Barber’s (Nia Sioux) death will pay off.

Since B&B characters tend to make the worst possible decision, Xander might take that info to Thomas first. Xander would be better off just going to the cops or at least to Hope. Anyone would be better than the villain in this story! However, Xander may think he can use this leverage to make Thomas come clean. He might confront Thomas with the proof and insist a confession must be made.

Even if Xander plans to keep the secret club ringleader in the dark, you can bet Thomas will find out anyway. Xander will hope he can stop this farce of a wedding and reunite Hope with her child. Thomas, on the other hand, will have far more sinister intentions. There’s no way he’ll let Xander blow this for him, so Xander should be afraid…VERY afraid.

It’s easy to imagine Thomas resorting to murder and then showing up to be Hope’s groom like nothing happened. Will Xander’s plot to thwart the wedding go horribly wrong? Will Thomas sink to a wicked new low just before he ties the knot? A bloody discovery may be waiting somewhere before they can even start their honeymoon!