BY hellodrdavis on July 1, 2019 | Comments: one comment
Related : Soap Opera, Spoiler, Television, The Bold and the Beautiful 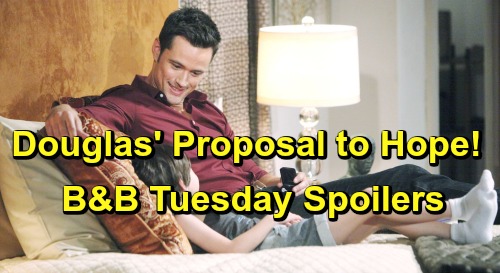 The Bold and the Beautiful spoilers for Tuesday, July 2, tease that Liam Spencer (Scott Clifton) will wake up the morning after the beach party a little fuzzy. As B&B viewers know, Liam exhibited some bizarre behavior at the party, and his happy and carefree demeanor totally put off Hope Logan (Annika Noelle). She didn’t exactly appreciate watching him party and dance happily with Steffy Forrester (Jacqueline MacInnes Wood).

Of course, Liam’s behavior wasn’t really genuine, because his margarita was secretly drugged by Thomas Forrester (Matthew Atkinson). Thomas was hoping that Liam’s behavior would upset Hope, and his plan worked out perfectly. Hope was indeed upset and ended up leaving the party in a huff.

But the real fireworks happened after Hope and Thomas left Steffy’s house. Steffy and Liam ended up falling into bed together after Liam gushed about how beautiful and special Steffy was. Of course, Liam was acting on feelings he truly has deep down, but the drugs in his system certainly helped initiate and fuel their lovemaking.

On Tuesday’s episode of B&B, Liam will awaken and remember what transpired the night before. He’ll be able to recall his behavior with more clarity now, since the drugs will have worn off, and he’ll probably be horrified at how he acted toward Hope. He may also be scratching his head about how he and Steffy ended up making love.

It will certainly be a weird morning for Liam. It doesn’t look like he’ll regret sleeping with Steffy, as he truly does love her, but he’ll likely regret how everything went down with Hope. Look for Liam to consider what he should do next and to talk with Steffy about what happened between them.

Next, on the new episode of B&B on Tuesday, July 2, Thomas will be feeling happy about how his plan worked out. He’ll be satisfied with how everything worked out after drugging Liam, since what he really wants is for Hope to find a way to move on from Liam and gravitate to him and Douglas Forrester (Henry Joseph Samiri).

But of course, Thomas isn’t going to rest on his laurels now. He’s still got to convince Hope to marry him, and to do that, he’s going to utilize Douglas in his next plan. The Bold and the Beautiful spoilers say that Thomas will share his plot with Douglas and enlist his help.

Specifically, Thomas will get Douglas on board with Hope being his new mommy. Of course, that won’t be difficult since Douglas sincerely loves Hope. But Thomas will also coach Douglas to help him out with his next marriage proposal to Hope. The idea will be for Douglas to ask Hope to marry Thomas and become his new mommy.

On Tuesday’s episode, look for Thomas to explain this plan to Douglas and get him on board with making the big proposal to Hope. And according to ongoing B&B spoilers, the plan will end up coming to fruition, and Thomas and Hope will become engaged!