BY Heather Hughes on June 18, 2019 | Comments: one comment
Related : Soap Opera, Spoiler, Television, The Bold and the Beautiful 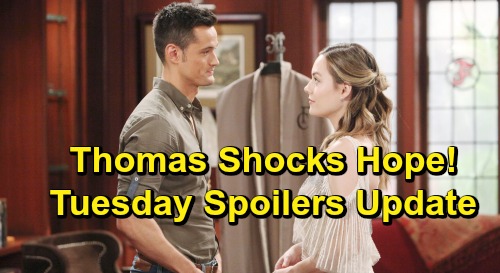 The Bold and the Beautiful (B&B) spoilers update for Tuesday, June 18, tease that plans for a get-together will bring some uneasy moments. Florence “Flo” Fulton (Katrina Bowden) will be unsettled when Wyatt Spencer (Darin Brooks) suggests a gathering with Steffy Forrester (Jacqueline MacInnes Wood) and Liam Spencer (Scott Clifton). He’ll think it’d be a good chance for all of them to form a deeper connection.

Of course, Flo won’t be on board. It’s already been hard enough to deal with the baby swap guilt. Flo won’t want to add to her problems by facing Steffy, who believes Flo gave birth to “Phoebe Forrester” (River Davidson and Madeline Valdez). The Bold and the Beautiful spoilers say Flo will advise against this little party and suggest Steffy probably wouldn’t want her there.

Wyatt will disagree, but Flo’s not exactly wrong. B&B fans can expect Steffy to object to this get-together as well. Liam will mention the idea to Steffy and get an unsettled response. Steffy won’t want to create an uncomfortable scene or leave Flo longing for her child. Since Steffy is thrilled with her life and the way things are going, she may think it’s best to not rock the boat.

However, it looks like Flo will reluctantly cave in while Steffy starts to see this as an opportunity. Liam may remind Steffy of how much she owes dear Flo. “Phoebe” has brought Steffy more joy than she could ever imagine, so she’ll decide Liam’s right. Steffy will want to thank Flo for giving her family such a wonderful gift, which is exactly what she’ll do later this week.

In the meantime, Thomas Forrester (Matthew Atkinson) will have a gift of his own. He’ll present Hope Logan (Annika Noelle) with a gorgeous Forrester Original, so Hope will definitely be floored. She may be hesitant to accept something with such a high price tag, but Thomas will insist she deserves it. He’d give Hope the world if he could – just not a world with her alive daughter in it!

Thomas will stay silent about Beth Spencer and plant another kiss on Tuesday. He’ll once again create a tense, awkward situation between them, but he’ll keep at it. The Bold and the Beautiful spoilers say Thomas won’t let anything stand in the way of his future with Hope.

Thomas will have some dangerous hurdles to take care of later this week, and the results won’t be pretty! We’ll give you updates as other B&B news comes in. Stay tuned to the CBS soap and don’t forget to check CDL often for the latest Bold and the Beautiful spoilers, updates and news.