BY Heather Hughes on June 25, 2019 | Comments: one comment
Related : Soap Opera, Spoiler, Television, The Bold and the Beautiful 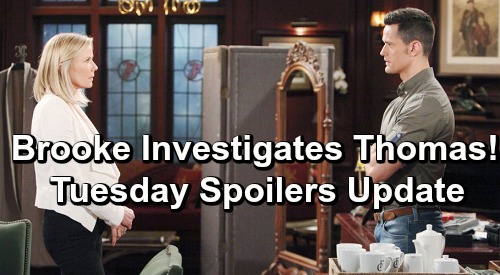 Hope’s already been struggling to overcome the loss of Beth Spencer, but the hits just keep coming. Emma’s demise obviously isn’t like losing her own daughter, but it’s still a bombshell. Brooke has every reason to worry since Hope’s in such a fragile state. Nevertheless, Brooke’s real concern here will be Thomas Forrester (Matthew Atksinon) and how he’ll use this shocker.

Thomas is quite the opportunist, so Brooke will assume he’s going to exploit the situation. She realizes Thomas intends to win Hope over by any means necessary. He certainly isn’t above using a dead girl who meant a lot to Hope at Forrester Creations; he isn’t even above using her own little girl!

Brooke will express her fears to Ridge Forrester (Thorsten Kaye), but he won’t share them. Ridge may argue that Thomas offering comfort would be a good thing. He probably won’t see the harm in Hope leaning on his son. Since Hope split from Liam Spencer (Scott Clifton), Ridge may think Thomas can be Hope’s rock during a difficult time. His support for “Thope” is growing stronger and stronger.

Brooke will be adamant that Thomas is obsessed and far too pushy. She won’t be on the same page with Ridge, so they’ll do some clashing on Tuesday. The Bold and the Beautiful spoilers say their kids will start creating more conflict in their marriage, so that can’t be good!

Of course, Brooke is right about Thomas’ taking advantage. He contributed to Emma’s accident and immediately rushed over to Hope. Thomas was waiting with open arms when Hope cried over Emma’s passing. Little does she know Thomas is at least partially responsible!

However, Brooke is on the verge of making a connection. The Bold and the Beautiful spoilers say Pam Douglas (Alley Mills) will mention something that gets the wheels turning. She’ll undoubtedly tip Brooke off to the strained interaction between Thomas and Emma, which went down just before Emma’s crash.

Pam may add that Emma was looking for Hope beforehand and assume that’s why she dashed off. Naturally, this will raise red flags for Brooke. She’ll feel like Thomas is withholding information, so she should be on a mission to learn more.

Brooke will get a step closer to the truth about Beth, so don’t miss all the action. We’ll give you updates as other B&B details emerge. Stay tuned to the CBS soap and don’t forget to check CDL often for the latest Bold and the Beautiful spoilers, updates and news.