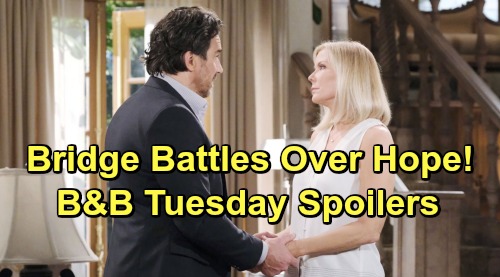 The Bold and the Beautiful spoilers for Tuesday, June 4, tease that Florence “Flo” Fulton (Katrina Bowden) will get a shock. She knew that Hope Spencer (Annika Noelle) had decided to end her marriage to Liam Spencer (Scott Clifton), and the news upset her terribly. As B&B viewers know, Flo is harboring a terrible secret about Hope and Liam’s daughter Beth Spencer.

Flo may have been thinking that she could possibly talk to Hope and get her to reconsider her decision to end her marriage with Liam, but that plan will come to a screeching halt when Flo learns that Hope and Liam spent their last evening together as a married couple and they’re planning to get an annulment as soon as possible.

Flo probably didn’t expect things to happen so quickly, and she knows deep down that the annulment wouldn’t be happening if it weren’t for Beth’s “death,” which ripped Hope and Liam apart.

Flo will realize all over again that it’s within her power to save Hope and Liam’s marriage, if she’d only tell the truth…that Beth is very much alive and living life as Phoebe Forrester (River Davidson and Madeline Valdez).

Look for Flo to wrestle with some serious guilt on Tuesday’s episode, as she hears about Hope and Liam’s pending annulment. She’ll once again teeter between divulging and keeping the secret, but as B&B viewers know, the costs of spilling the beans at this point are very high for Flo.

Meanwhile, on the new episode of B&B on Tuesday, June 4, Ridge Forrester (Thorsten Kaye) and Brooke Forrester (Katherine Kelly Lang) will discuss their children’s relationships once again. This is familiar territory for Brooke and Ridge, ever since the very beginnings of the love triangle between Hope, Liam, and Steffy Forrester (Jacqueline MacInnes Wood) began.

Of course, Brooke feels terribly for Hope, and she thinks that Hope’s decision to end her marriage to Liam is a big mistake. In Brooke’s eyes, Hope and Liam should be supporting each other and helping each other through the pain of losing Beth, not breaking up over it.

But of course, Hope sees things differently. She wants to put the children first and she truly believes that Liam needs to be with Kelly Spencer (Zoe Pennington and Chloe Teperman) and Phoebe full-time. And Hope wants to put Douglas Forrester (Henry Joseph Samiri) first in her life and become a permanent mother-figure to him.

On Tuesday’s, episode of The Bold and the Beautiful, look for Ridge and Brooke to argue about their children’s relationships, as Ridge plays devil’s advocate with his wife about the possibilities that lie ahead for Hope, Liam, and Steffy.

Ridge might argue that Hope could be very happy with Thomas Forrester (Matthew Atkinson) and Douglas, while Liam and Steffy could forge ahead and create a loving home for Kelly and Phoebe.

But don’t expect Brooke to be moved by Ridge’s persuasion attempts. Brooke strongly feels that Liam and Hope belong together, and trying to sell her on another arrangement will be tough.