BY Heather Hughes on March 5, 2019 | Comments: one comment
Related : Soap Opera, Spoiler, Television, The Bold and the Beautiful 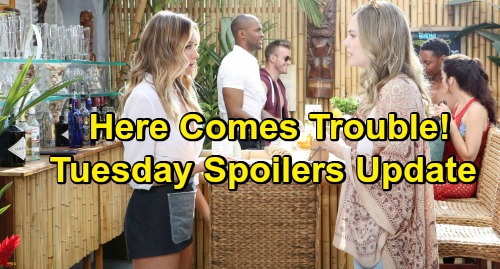 The Bold and the Beautiful (B&B) spoilers for Tuesday, March 5, tease that Florence “Flo” Fulton (Katrina Bowden) will prepare to come clean. Now that she’s encountered Hope Spencer (Annika Noelle), Flo just won’t know if she can stay silent anymore. It was hard enough before she put a face to the name, but now the guilt will be downright unbearable.

Flo will start to make her confession, but Zoe Buckingham (Kiara Barnes) will halt that plan. She’ll rush over to stop Flo from spilling the whole story and taking down Dr. Reese Buckingham (Wayne Brady) in the process. However, Zoe won’t be able to keep a lid on everything. Hope will still find out that Flo is “Phoebe Forrester’s” (Isabella de Armas and Redford Prindiville) “birth mom.”

Zoe will be nervous about that revelation, but at least she’ll keep the bigger secret for now. It’d be catastrophic for Reese if the entire baby swap truth came out. Zoe doesn’t want to see her dad land in prison, so she’ll do whatever she can to keep Flo in line.

Nevertheless, Hope’s affection for this fake birth mom will bring difficulties. Zoe will try to hide her nervousness as Flo and Hope connect. She may end up pulling Flo off to the side if things get too dicey. Zoe will warn Flo to steer clear of Hope or else, but Flo will have other ideas. She’ll grow closer to Hope and nearly confess to her at a dinner party later this week.

Other Bold and the Beautiful spoilers say Liam Spencer (Scott Clifton) will have to consider what’s in his heart. He pushed Wyatt Spencer (Darin Brooks) to give him an honest opinion, so that’s what Liam will get on Tuesday. Wyatt understands that Liam wants to support Hope, but he won’t think Liam should automatically dismiss a “Steam” reunion either.

B&B fans know Liam has a lengthy history with Steffy Forrester (Jacqueline MacInnes Wood). They brought a daughter into this world and Liam intends to be there for “Phoebe” as well. Hope believes Liam, Steffy, Kelly Spencer (Zoe Pennington and Chloe Teperman) and Phoebe would all be better off as a united family. Wyatt obviously thinks that’s a decent idea, so he’ll encourage Liam to consider it.

Liam may push back and insist that he won’t bail on Hope when she needs him most. Of course, that won’t be what Wyatt’s getting at. He’ll simply suggest that if Liam’s feelings for Steffy run deeper, perhaps he shouldn’t shove them aside. Wyatt can respect that Liam wants to care for Hope right now, but he won’t believe his brother should close the door on a future with Steffy.