BY hellodrdavis on May 27, 2019 | Comments: one comment
Related : Soap Opera, Spoiler, Television, The Bold and the Beautiful 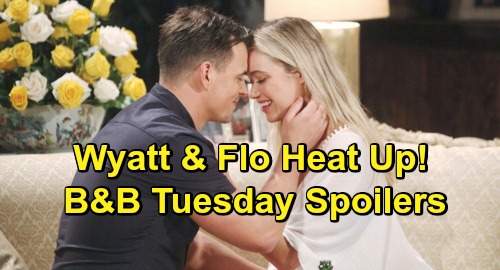 The Bold and the Beautiful spoilers for Tuesday, May 28, tease that Thomas Forrester (Matthew Atkinson) will be feeling particularly smug. He has been scheming intensely to break up Liam Spencer (Scott Clifton) and Hope Spencer’s (Annika Noelle) marriage. Most recently, he forged a letter which he presented to Hope as being from the late Caroline Spencer (Linsey Godfrey).

After reading the letter, which was all about “Caroline’s” desire for a woman to step in and raise Douglas Forrester (Henry Joseph Samiri) in the event anything happened to her, Hope was persuaded to end her marriage to Liam. Of course, Hope was already teetering on the edge of leaving Liam, since she feels that he should be a full-time father to Kelly Spencer (Chloe Teperman and Zoe Pennington) and Phoebe Forrester (River Davidson and Madeline Valdez).

It seems that Thomas will be feeling his oats now that he knows that Hope is indeed ending her marriage to Liam. He will feel particularly proud of himself for causing the development, and that will lead him to try to get closer to Hope. Look for Hope and Thomas to spend some time together on Tuesday’s episode, and for Thomas to make a bold move.

Specifically, B&B spoilers indicate that Thomas will go so far as to plant another kiss on an unsuspecting Hope. Hope will be stunned by his move, but viewers will have to wait to see exactly what her reaction will be. Will she push Thomas away as forcefully as she did when he kissed her previously, or will she have softened a bit to his advances?

Meanwhile, on the new episode of B&B on Tuesday, May 28, Florence “Flo” Fulton (Katrina Bowden) will enjoy some carefree time with Wyatt Spencer (Darin Brooks). The two have just gone for a dip in the Forrester pool, and it looks like they will continue to have fun and enjoy each other’s company.

Of course, for Flo, this will be a welcome respite from all of the worry and guilt she’s been feeling over keeping the secret about Hope’s baby Beth Spencer. Flo, along with Zoe Buckingham (Kiara Barnes) and Shauna Fulton (Denise Richards), have been burdened with the knowledge that Steffy Forrester’s (Jacqueline MacInnes Wood) adopted baby Phoebe is actually Hope’s baby Beth.

But for the afternoon at least, Flo will enjoy getting re-acquainted with Wyatt as they have the Forrester mansion all to themselves. They’ll likely reminisce about old times and start to form new memories.