BY hellodrdavis on November 18, 2019 | Comments: one comment
Related : Soap Opera, Spoiler, Television, The Bold and the Beautiful 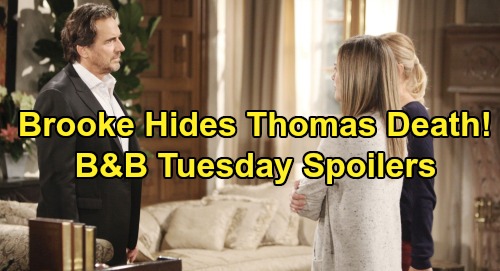 The Bold and the Beautiful spoilers for Tuesday, November 19, tease that things are going to heat up on the CBS drama. But before we get to that, we have a programming note to pass along. There are impeachment hearings scheduled for Tuesday in both the morning and the afternoon, so there’s a very good likelihood that Tuesday’s show will be pre-empted. But in the event the show airs on Tuesday, here’s what you can expect.

First off, Hope Logan (Annika Noelle) will struggle as she tries to explain to Ridge Forrester (Thorsten Kaye) about Thomas Forrester (Matthew Atkinson). As B&B viewers know, Hope has just made a shocking statement to Ridge, with Brooke Forrester (Katherine Kelly Lang) standing by – Hope declared that Thomas is dead – at least that’s how B&B has made it look for now.

But it seems that something will happen to snap Hope out of confession mode. Brooke will step in and cover for Hope with some sort of explanation for her stunning statement – explaining that Hope meant Thomas is ‘dead’ to her. Ongoing B&B spoilers say that Ridge will eventually wind up horrified by the depths of Brooke’s deception, so it certainly seems that she’s going to lie to Ridge about what she and Hope believe happened to Thomas for now.

Of course, once Brooke conceals Thomas’ supposed death to Ridge, then that means that Hope will do the same, so it doesn’t look like Hope’s statement about Thomas being dead is going to go anywhere right now. Instead, B&B spoilers say that Hope will struggle to tell Ridge why Thomas is missing. Again, it looks like Brooke will step in with an explanation, perhaps about Thomas saying that he had to be away for a few days.

Brooke doesn’t want to see her daughter go down for killing Thomas, and she’s been hinting around at covering up the crime, so it looks like Brooke is going to lead the way here, with some sort of story. And it appears that the story will paint Thomas in a bad light, since B&B spoilers indicate that Ridge is going to hear all about Thomas’ indecent proposal to Hope.

As B&B viewers know, Thomas offered to sign the adoption papers for Hope if she slept with him, and Brooke will spill that part of the story to Ridge, as a way of deflecting attention from Hope. Maybe Brooke will say that Thomas doesn’t want to show his face for a while out of shame for what he proposed. Whatever the case, Ridge will be thrown for a loop.

The Bold and the Beautiful spoilers also indicate that Ridge will share the horrible details about Thomas’ indecent proposal with Steffy Forrester (Jacqueline MacInnes Wood), which should be tough for her to hear. They’ll both be concerned for Thomas, so it certainly sounds like they won’t have any clue what really happened with Hope and Thomas on the catwalk. They’ll just be worried about Thomas’ psychological state and wonder where he is.

But of course, this won’t be the first time that Thomas has just gone off somewhere and been out of touch, so it doesn’t seem that Ridge and Steffy will be concerned that Thomas may be hurt or worse, but still they’ll be alarmed and will want to talk with him. Plus, Ridge will probably want to fact-check Hope and Brooke’s story, which he’d be wise to do.