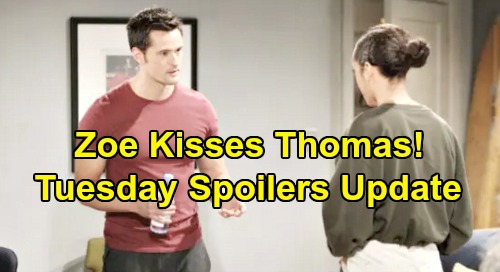 The Bold and the Beautiful (B&B) spoilers update for Tuesday, November 5, teases that Thomas Forrester (Matthew Atkinson) will get quite a surprise from Zoe Buckingham (Kiara Barnes). B&B fans know Thomas is eager to get Hope Logan (Annika Noelle) into bed, but that’s obviously not what she has in mind. Thomas will voice his frustration on Tuesday, but Zoe will provide an unexpected distraction – albeit a brief one.

In hopes of gaining Thomas’ attention, Zoe will plant a kiss on him. She’ll put plenty of passion into this lip lock and count on Thomas taking notice. Unfortunately, Thomas will continue obsessing over Hope. He’ll have a romantic setup waiting for Hope later this week, but he might keep Zoe in the back of his mind. Thomas has commented on Zoe’s beauty before, so it’s not like she’s completely off his radar.

In other words, Zoe may just have to be patient here. If she really wants a shot with Thomas, she just needs to wait it out and be there for him after things explode with Hope. In the meantime, Liam Spencer (Scott Clifton) will get a surprising offer. It looks like Liam will take Steffy Forrester’s (Jacqueline MacInnes Wood) advice and approach Bill Spencer (Don Diamont) to officially grant him forgiveness. However, Liam will walk away with a lot more than Bill’s gratitude.

The Bold and the Beautiful spoilers say Bill will have a proposal for Liam to consider. He’ll make a convincing pitch about how much he wants his son back at Spencer Publications. Bill will have several incentives and selling points in his pitch. He’ll do everything he can to show Liam that the family business is where he belongs.

Liam will be pleased that they’re moving past Bill’s betrayal and focusing on the future. Rejoining Spencer Publications would certainly seal this fresh start. Nevertheless, this is a major decision in Liam’s career. He’ll want to mull it over before giving Bill his answer, but he’ll definitely make a Spencer comeback soon enough.