The Bold and the Beautiful Spoilers: Tuesday, October 15 Update – Flo’s Surprise Visit from Thankful Wyatt – Thomas’ Next Blow to ‘Bridge’

BY Heather Hughes on October 15, 2019 | Comments: one comment
Related : Soap Opera, Spoiler, Television, The Bold and the Beautiful 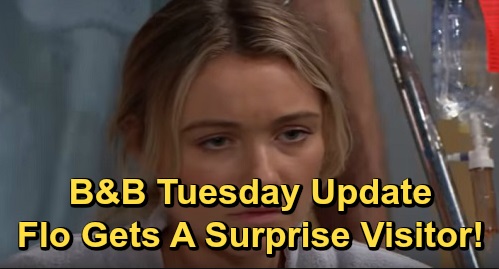 The Bold and the Beautiful (B&B) spoilers update for Tuesday, October 15, teases that Florence “Flo” Fulton (Katrina Bowden) will get a special visitor. Once Flo’s recovering nicely at home, Wyatt Spencer (Darin Brooks) will stop by. It’ll be an impulsive pop-in, but he’ll definitely have something important to say. Wyatt will admit he heard about Flo’s gift to Katie Logan (Heather Tom) and wanted to thank her in person.

Flo will likely downplay her sacrifice and maintain that she simply wanted to help. She knows she could never make up for all her Beth Spencer (River Davidson and Madeline Valdez) lies, but she couldn’t sit back and do nothing. Flo will just be glad she could make a difference, especially to her father’s family. She’ll remain hopeful that Storm Logan (William deVry) would approve of her efforts to save Katie.

Wyatt will insist they’re all grateful – and that certainly includes him. Flo’s kidney donation allowed Katie to live and be a mother to her young son, Will Spencer (Finnegan George). Without Flo, they could’ve been planning a funeral soon enough. B&B spoilers say Wyatt will understand this is a huge deal, so he’ll show Flo his gratitude before heading out.

Of course, this could shift Wyatt’s perspective in a big way. He told Sally Spectra (Courtney Hope) there was nothing Flo could do to make him see her differently. Now that Flo’s saved Katie’s life, that’ll change the game. Wyatt will have to accept that Flo’s still got a good heart – the same heart he fell in love with. Sally should be worried when Flo starts winning Wyatt over once again.

In the meantime, Brooke Forrester (Katherine Kelly Lang) and Ridge Forrester (Thorsten Kaye) will face another round of conflict. Ridge will feel like Thomas Forrester (Matthew Atkinson) needs to begin a new chapter at Forrester Creations. He’ll just want his son to have a chance to reclaim his life – and part of that means thriving in his career.

Naturally, Thomas should be pulling the strings. He’ll likely be breathing down Ridge’s neck about getting back in the action, but Brooke will be firmly against it. She’ll contend that Thomas hasn’t paid for his mistakes and shouldn’t even be allowed through the door. The Bold and the Beautiful spoilers say Thomas will cause a major blowup about his role at Forrester and what his future should look like.

Thomas will act like he’s sorry for Ridge and Brooke’s marriage woes. He’ll pretend to have remorse about causing more issues, but he’ll secretly be loving the drama! The Bold and the Beautiful spoilers say another great episode’s coming up. We’ll give you updates as other B&B news emerges. Stay tuned to the CBS soap and don’t forget to check CDL often for the latest Bold and the Beautiful spoilers, updates and news.