The Bold and the Beautiful Spoilers: Hope & Steffy Drama Spills Over Into Workplace – Forrester Creations Becomes A Battleground 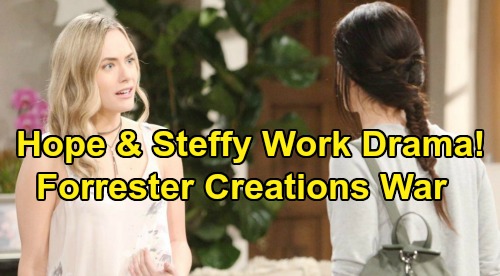 The Bold and the Beautiful spoilers tease that Hope Logan (Annika Noelle) and Steffy Forrester (Jacqueline MacInnes wood) will soon find themselves in familiar territory. As B&B viewers know, they haven’t had much interaction with each other since the day that Hope and Liam Spencer (Scott Clifton) took Beth Spencer (River Davidson and Madeline Valdez) out of Steffy’s home after the big “Phoebe is Beth” reveal. But that’s soon going to change, and the interactions between them are going to get contentious.

First off, Hope will find herself upset after Liam takes Beth to see Steffy at the cliff house for a visit. It seems that Hope will be feeling protective of her own mother-daughter relationship with Beth and won’t want Steffy to be getting in the way of their bonding. Around the same time, Hope will spy a text on Liam’s phone from Steffy, and she’ll become jealous. It certainly seems like old wounds will be reawakened between Hope and Steffy, with Liam smack dab in the middle.

And according to fall spoilers, the situation between Hope, Steffy, and Liam will start to spill over into the workplace at Forrester Creations. Of course, things have always been a bit tense between Hope and Steffy at work, with their respective fashion lines in competition for resources. There were some hurt feelings back when Ridge Forrester (Thorsten Kaye) decided to fund Steffy’s Intimates line in favor of funding Hope’s Hope For The Future line, which was a big deal at the time. But that will probably seem like nothing compared to what’s to come.

Both Steffy and Hope have been largely absent from the workplace lately, but it seems that this will change as the weeks go by. Eventually, Steffy will be back in the office as a full-time co-CEO, and Hope will return to work on Hope For The Future once again. But will these ladies be able to co-exist at work given what’s happened with Beth so recently? Steffy may find herself wondering about how Beth is doing and could even go to the Forrester childcare center to check on her – something that would surely irritate Hope.

And then there’s the matter of Liam. If Hope’s feeling insecure about Liam being around Steffy for some reason, then that could make the workplace tense, given that Liam works at Forrester, too. B&B spoilers indicate that Hope will have ongoing concerns about Liam’s relationship with Steffy, which they’ll have to continue give that they share a daughter together, too. It could make working together difficult, especially if executive decisions have to be made about Hope for The Future by Steffy.

And there’s another factor to consider here as well, and that’s that Thomas Forrester (Matthew Atkinson) could very well be returning to Forrester Creations. He’s been after Ridge to let him come back, and he’s even been designing and making plans for the future. If Thomas were to return to work with Steffy, Hope, and Liam, then that would certainly cause all sorts of problems.

In fact, it’s hard to imagine a Forrester landscape with Ridge, Thomas, Brooke Forrester (Katherine Kelly Lang), Hope, Steffy, and Liam all being there and trying to get along. But it looks like that may be what we’ll be seeing in the weeks to come. It will probably only add to Hope and Steffy’s stress levels and will probably serve to cause even more stress between the two.

Do you expect to see friction once Hope and Steffy return back to Forrester Creations? Stay tuned to the CBS soap and don’t forget to check CDL often for the latest Bold and the Beautiful spoilers, updates, and news.