The Bold and the Beautiful Spoilers: Tuesday, October 15 – Wyatt Expresses Gratitude To Flo – Thomas Wants Back In At Forrester 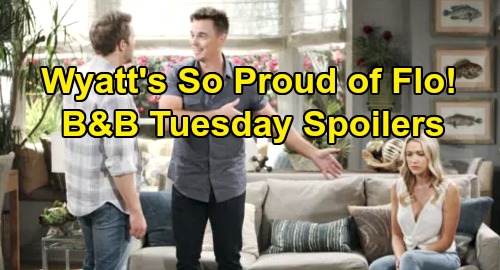 The Bold and the Beautiful spoilers for Tuesday, October 15, tease that Wyatt Spencer (Darin Brooks) will be feeling particularly grateful. As B&B viewers know, the Logan family has just found out that Katie Logan’s (Heather Tom) kidney donor was Flo Fulton (Katrina Bowden). That caused some seriously mixed emotions among the family, and it seems that on Tuesday’s episode, the news about the identity of Katie’s donor will spread.

Of course, since Flo’s surgery was endoscopic, that means she’ll be able to go home fairly quickly after the surgery – much sooner than Katie will be able to return home. Flo will be recovering at her apartment when she gets an unexpected visitor…Wyatt. According to B&B spoilers, he’ll stop by the apartment on impulse to tell Flo in person just how much he appreciates what she did.

Wyatt will probably know that Flo was met with some disdain after it was revealed that she was Katie’s donor. Although the Logan sisters were thankful to Flo for saving Katie’s life, they remained very angry with her over her role in keeping Beth Spencer (River Davidson and Madeline Valdez) from Hope Logan (Annika Noelle) for so long. Brooke Forrester (Katherine Kelly Lang) was especially harsh with both Flo and her mother Shauna Fulton (Denise Richards) and made it clear that Flo was definitely not forgiven.

But Wyatt will want Flo to know that there’s at least someone in the family who respects what she did. Wyatt’s really been struggling lately to reconcile the “honest” Flo that he knew with the “dishonest” Flo who lied about being Beth’s birth mother and kept Beth from Hope and Liam Spencer (Scott Clifton). It will probably do his heart some good to know that Flo stepped up and saved Katie, and he’ll want her to know that.

Of course, exactly how Sally Spectra (Courtney Hope) is going to feel about the little visit will be another matter. She probably won’t be happy to learn about it, but even she will probably have to concede that Flo did a good thing here. She might be worried, however, about whether the visit will give Flo false hope that she might have a shot at getting back together with Wyatt, now that she’s more redeemed in Wyatt’s eyes.

Meanwhile, on the new episode of B&B on Tuesday, October 15, it looks like Brooke and Ridge Forrester (Thorsten Kaye) will get into it again. These two have had a terrible time getting along lately, as there are just too many major issues that they disagree about. B&B spoilers say that the two will argue about familiar issues once again, including the issue of whether Thomas Forrester (Matthew Atkinson) has any place at Forrester Creations.

As B&B viewers know, Thomas has been spending his down time designing and preparing for an eventual return to Forrester Creations. He’s shown his father his sketches in the hopes of persuading him to let him come back to the family company. It looks like Ridge might be considering the possibility of allowing Thomas to come back to work, as this will be the topic of Brooke and Ridge’s argument on Tuesday’s episode.

It also appears that Thomas will witness the argument between Brooke and Ridge, and he’ll get himself into the middle of it. According to B&B spoilers, he’ll feign regret to Brooke about his past actions, so it looks like he might be trying to portray himself as remorseful for his past actions in front of his father, so that Ridge will agree to take him back.

But chances are, Brooke’s not going to buy any of what Thomas is selling. And that will likely put Ridge right back into the position of having to choose between Brooke and his son. Brooke may think that she can dictate whether Thomas comes back to Forrester Creations, but we bet she’ll have another thing coming, as Ridge is probably far more likely to side with his son than with his estranged wife at this point.