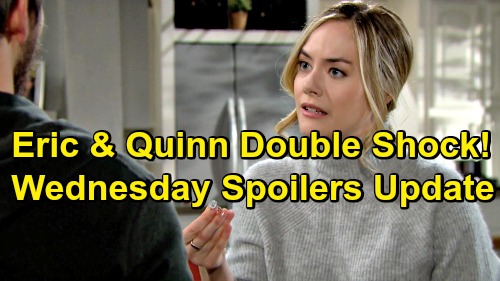 The Bold and the Beautiful (B&B) spoilers for Wednesday, February 27, tease that Eric Forrester (John McCook) and Quinn Forrester (Rena Sofer) will be blindsided. They’ll get some news they never saw coming, so they’ll have some questions soon enough. B&B fans know Wyatt Spencer (Darin Brooks) recently made a deal with Bill Spencer (Don Diamont), so it’s time to spread the word.

Of course, this news also involves Sally Spectra (Courtney Hope). Wyatt convinced Bill to revive Spectra Fashions as part of his return to the company, so they’ll both be bailing on Forrester Creations. Obviously, it’s nothing personal! Eric has been good to both Wyatt and Sally, so they’ll want to reassure him about that. They’ll let Eric know that they’re simply following their hearts.

Wyatt plans to make Sally’s dream a reality, so he’s happy that it all came together like this. Deep down, Wyatt wants to be closer to Bill anyway. This is their chance to repair at least part of the family, so Wyatt might as well take advantage of it. He’ll explain the situation with Sally by his side in Wednesday’s episode.

Sally will be grateful for the second chance she was given at FC and hope there are no hard feelings. Eric surely won’t hold this against Sally. He thinks she’s a talented gal with a lot of potential, so he’ll want to see her go far. The same goes for Wyatt, who he’s grown close to since marrying Quinn.

Speaking of Quinn, she may not be as convinced this is the right call. Quinn might have reservations about Wyatt working for Bill again, especially since it’ll mean she won’t see him at work anymore. Nevertheless, Quinn will have to accept Wyatt and Sally’s decision. They aren’t changing their minds, so Quinn will just have to wish them luck and let it go.

Other Bold and the Beautiful spoilers say Katie Forrester (Heather Tom) will get emotional on Wednesday. She’ll be touched by how Bill continues to step up for Will Spencer (Finnegan George) and even her. Bill will reiterate that his family comes first from now on. He’ll let Katie know that if there’s anything she needs, she shouldn’t hesitate to call.

Will’s loving all these warm moments with his parents. He’ll do his best to keep this trend going strong, which definitely works out for Donna Logan (Jennifer Gareis) and Justin Barber (Aaron D. Spears). Will’s efforts could make their reunion plot even easier to pull off!