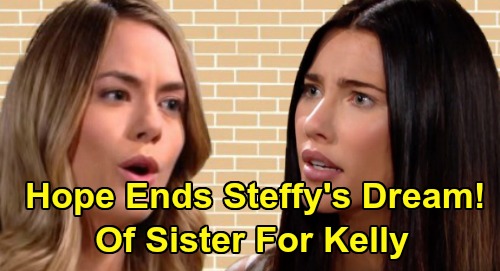 The Bold and the Beautiful spoilers tease that Hope Logan (Annika Noelle) will find herself in a distressing situation. As B&B viewers know, she recently got her daughter Beth Spencer (River Davidson and Madeline Valdez) back after thinking she had died during childbirth. It was a true miracle for both Hope and Liam Spencer (Scott Clifton), and they’ve been enjoying all of the time they’ve been spending with Beth lately. They’ve really been making up for lost time, and it’s been great.

But there are a couple of people who have been suffering while Hope, Liam, and Beth have been bonding. Steffy Forrester (Jacqueline MacInnes Wood) has been dealing with her profound loss. Of course, she went for months thinking that Beth was her adopted daughter “Phoebe Forrester,” and to have Beth ripped out of her arms was devastating for her. The whole situation is terribly sad for Steffy, but Steffy knows that Beth belongs to Hope and Liam, so she’s resigned to work through it.

But what about Kelly Spencer (Zoe Pennington and Chloe Teperman)? While Steffy is an adult and can process her loss intellectually, Kelly cannot. She had gotten used to having her sister around her all the time, and now Beth’s gone from the house permanently. But will Hope, Liam, and Steffy make an effort to have Kelly and Beth grow up together and be close sisters, like Steffy originally wanted for them?

Well, B&B spoilers indicate that this might be more difficult than anyone ever thought possible, as Liam will soon secretly take Beth to Steffy’s house for a visit. The operative word here is “secretly,” indicating that he won’t think that Hope would approve of Steffy or Kelly getting a visit with Beth. And B&B spoilers say that Hope will later find out about the visit, and she’ll be upset. This all suggests that the original plans that the adults had for an extended/blended family really isn’t going to work out.

And this gets us wondering what the future landscape is going to look like for Kelly and Beth as sisters. Will Hope continue to balk at Steffy spending time around Beth going forward? Ordinarily, one would normally expect things like play dates and overnight visits between half-sisters like Beth and Kelly, but it certainly doesn’t look like that’s the direction that things are going between Liam’s two families.

We also can’t help but remember how, at one point before Beth was born, Hope announced that they wouldn’t be able to raise Kelly and Beth together because of Taylor Hayes (Hunter Tylo) living with Steffy, which was the case at the time. What happens if Steffy ultimately reconciles with Thomas Forrester (Matthew Atkinson)? It might take a while for that to happen, but eventually Steffy is going to have a relationship with someone that Hope doesn’t care for.

It would truly be sad if Kelly and Beth wind up suffering as a result of their parents not being able to work out an arrangement here. For the short term, it looks like it will be Hope who’s trampling on a possible sisterly relationship between the girls, but there will surely be more difficulties between Hope, Liam, and Steffy going forward, and we wonder if the girls will get caught in the crossfire.

We’ll see what happens after Liam takes Beth for the secret visit with Steffy. Even though Hope will be upset, perhaps it will create a dialogue over what they’re going to do in the future to foster the girls’ relationship. Do you think that Steffy, Hope, and Liam will be able to work out their extended/blended family situation with good results? Stay tuned to the CBS soap and don’t forget to check CDL often for the latest Bold and the Beautiful spoilers, updates, and news.