The Bold and the Beautiful Spoilers: Liam Should Be Single and Heartbroken – Character Reboot Needed Before Steam Reunion 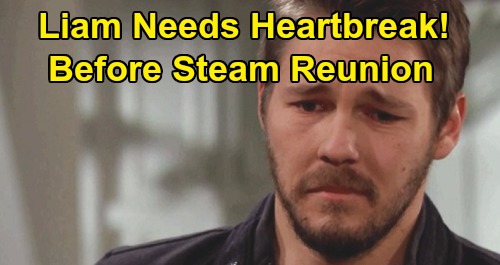 The Bold and the Beautiful (B&B) spoilers tease that Liam Spencer (Scott Clifton) will find himself caught between the two women he loves. Hope Logan (Annika Noelle) is currently Liam’s main squeeze, but that doesn’t mean he’ll ever stop caring about Steffy Forrester (Jacqueline MacInnes Wood). She’s the mother of his child, and there’s plenty of history between them.

It’s that history that will drive Hope to make some bold, protective moves. She’ll hate the idea of repeating the past and watching Liam reunite with Steffy for the umpteenth time.

Many B&B fans can probably agree with Hope on that! However, viewers may not agree with Hope’s confrontational attitude, which she could easily have after jealousy erupts.

Liam’s lingering connection with Steffy will drive Hope crazy. After she sees Steffy’s message on Liam’s phone, it could start another round of friction. This may build to the Forrester Creations drama fans were promised in the fall preview. The Bold and the Beautiful spoilers say Beth Spencer (River Davidson and Madeline Valdez) will play a role in that drama.

In other words, all Steffy and Hope’s issues are seemingly set to explode. Liam will have to find a way to deal with that, so he’ll have to choose wisely! One wrong move could end in disaster. Liam won’t want to be disloyal to Hope, but he won’t want to pour salt in Steffy’s wound either. She was crushed after she had to give back “Phoebe Forrester.”

Liam may end up alienating them both if he’s not careful. Of course, that wouldn’t be such a bad thing! Liam needs to sit his flip-flopping butt down and do some soul-searching!

Is Liam Spencer Worthy Of Hope Logan Or Steffy Forrester?

Perhaps having Hope turn against Liam and Steffy reject him would be the best possible outcome. Liam could stand to take a step back from love and figure out why he’s so prone to woman-hopping.

Who can blame Hope for having concerns? Liam isn’t exactly someone who sticks to one woman for too long. Plenty of B&B viewers don’t feel Liam is worthy of Hope OR Steffy at this point. By having Liam be single and heartbroken for a while, it might provide a bit of a reboot and allow for a romance that’s easier to root for. A potential “Steam” reunion might make more sense then.