BY hellodrdavis on October 21, 2019 | Comments: one comment
Related : Soap Opera, Spoiler, Television, The Bold and the Beautiful 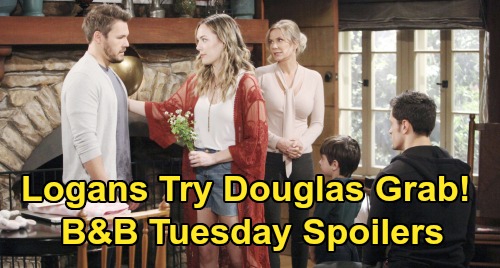 The Bold and the Beautiful spoilers for Tuesday, October 22, tease that Hope Logan (Annika Noelle) will forge ahead with her plans for Douglas Forrester (Henry Joseph Samiri). As B&B viewers know, Hope’s just had a terrible argument with Steffy Forrester (Jacqueline MacInnes Wood) during which she indicated that she and Liam Spencer (Scott Clifton) were going to be a family with Beth Spencer (River Davidson and Madeline Valdez) and Douglas. That certainly shocked Steffy, who was quick to point out that Hope isn’t Douglas’ mother.

Well, it seems that Hope’s interaction with Steffy won’t deter her from her quest to make Douglas a permanent part of her home. On Tuesday’s B&B episode, Hope will sit down for a chat with Liam and she’ll ask him to give Douglas a permanent home with them and Beth. She’ll no doubt argue that Douglas has been thriving in their home and that Thomas Forrester (Matthew Atkinson) can’t provide a stable environment for him right now.

Of course, Liam really loves Douglas and enjoys having him being a part of his family with Hope, but it might take a bit of convincing for him to agree to actually seek to make Douglas a permanent part of his family. First off, there’s the issue of Thomas, who will surely put up a fight when it comes to relinquishing his son. Then there’s the issue of Steffy, who will surely be upset with Liam if he tries to fight for custody of Douglas against Thomas.

Still, it looks like Liam will agree that Douglas can stay with them as long as it takes, but it’s not clear whether he’ll be fully on board with what will become Hope’s mission to take Douglas from Thomas. Ongoing B&B spoilers indicate that Hope will eventually try to manipulate Thomas into signing adoption papers for Douglas, which should be interesting. Whether Liam goes along with those extreme measures remains to be seen.

Meanwhile, on the new episode of B&B on Tuesday, October 22, Thomas will get wind of Brooke Forrester (Katherine Kelly Lang) and Hope’s plot to keep Douglas from him permanently. Of course, Thomas has been away from his son for a while, and until recently Ridge Forrester (Thorsten Kaye) has been living in the same house as Douglas. But now Ridge is not living at Brooke’s mansion, and that leaves Douglas with just the Logans.

Well, it seems that someone will tip Thomas off as to Brooke and Hope’s desire to keep Douglas away from him. It could be Steffy who alerts Thomas to Hope’s big plan to raise Douglas with Liam, but however Thomas finds out, he’ll go rushing to Brooke’s home to find out what’s going on. Of course, whether he gets onto the property remains to be seen, but it looks like he’ll want to find his son and reclaim him.

Ongoing B&B spoilers indicate that Thomas and Ridge will eventually have a major standoff with Brooke, Hope, and Liam over the plot to take Douglas from Thomas. Ridge won’t be happy to learn about the plan to undermine Thomas’ ability to be a father to Douglas, and a big argument will ensue when he realizes that the whole thing was Brooke’s idea. It should be a bad scene and the start of many Forrester-Logan standoffs to come.