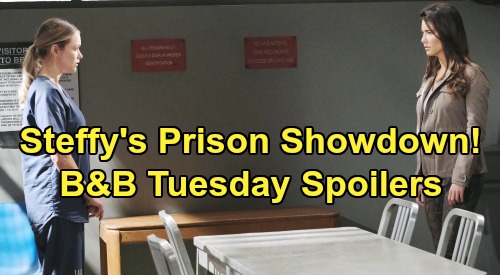 The Bold and the Beautiful spoilers for Tuesday, September 10, tease that Ridge Forrester (Thorsten Kaye) will make a difficult decision. As B&B viewers know, he’s just been approached by Detective Alex Sanchez (Jeremy Ray Valdez) with the news that there’s insufficient evidence with which to charge Thomas Forrester (Matthew Atkinson) in connection with Emma Barber’s (Nia Sioux) death. That was great news for Ridge.

But there’s also a big wrinkle when it comes to Flo Fulton (Katrina Bowden) and the legal case against her. As Detective Sanchez explained, Flo could ultimately be a huge help in an ongoing investigation into the forging of legal documents, which Reese Buckingham (Wayne Brady) did when he was securing the illegal adoption of Beth Spencer (River Davidson and Madeline Valdez) to Steffy Forrester (Jacqueline MacInnes Wood). That, plus the fact that Flo can testify against Reese, can get her an immunity deal.

But for the immunity deal for Flo to go through, it appears as though the Forrester family has to agree to it. Of course, Ridge immediately said no to the deal, but then Detective Sanchez reminded him that if Flo is prosecuted, a lot of dirty laundry is going to air about Thomas. Flo will have to recount how Thomas threatened her, and how she was scared of him due to his actions relative to Emma and her fatal car accident.

And this has Ridge in a bind. He wants to protect his son from being skewered in the press, so it looks like he’s going to officially agree on behalf of the Forrester family to let Flo off the hook. According to B&B spoilers he’ll make the difficult decision to let Flo walk with an immunity deal in order to protect Thomas, which will weigh heavily on him. And it looks like he’ll make the deal without consulting with Brooke Forrester (Katherine Kelly Lang) or the rest of his family.

That certainly isn’t going to sit well with Brooke when she finds out. B&B spoilers say that Brooke will be busy on Tuesday’s episode making her feelings about Thomas crystal clear to someone, and that will include the strong feeling that Thomas needs to pay for what he’s done. She’s not going to like the fact that the DA isn’t going to pursue charges against Thomas for Emma’s death, and she’ll detest the fact that Ridge agrees to let Flo off the hook to spare Thomas.

Meanwhile, on the new episode of B&B on Tuesday, September 10, Steffy will pay a visit to Flo. As B&B viewers know, Steffy will be fresh from a visit with Thomas, during which she raged at him for his actions and ultimately cut off her relationship with him. She’ll also decide to see Flo and confront her for her actions. Steffy is going through a lot right now, trying to go on with life without her adopted daughter, who turned out to be Beth. She’s in pain, and she’ll make sure that Flo knows it.

Look for an intense confrontation between Steffy and Flo, as Steffy takes charge of the conversation and blasts the lying fake birth mom for her actions. Of course, Flo will probably try to apologize and explain, but she likely won’t get very far. And her big excuse about Thomas threatening her probably won’t fly with Steffy at all. After all, Flo lied directly to Steffy’s face about being “Phoebe Forrester’s” birth mom long before Thomas ever found out about the scheme.

As far as Steffy’s concerned, Flo is the one person who could have put an immediate and early stop to Reese’s plan. Sure, Reese was the kidnapper, and Flo couldn’t have stopped him from taking Beth in the first place, but Flo found out about his plot soon thereafter and should have immediately gone to the police. Steffy just won’t see anything forgivable about that, and she’ll tell Flo that she hopes she rots in prison where she belongs.