The Bold and the Beautiful Spoilers: Vengeful Thomas Targets Hope and Her Family – Wants Rid of Toxic Logans Permanently

BY Heather Hughes on September 21, 2019 | Comments: one comment
Related : Soap Opera, Spoiler, Television, The Bold and the Beautiful 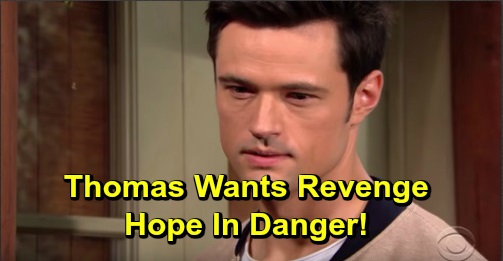 The Bold and the Beautiful (B&B) spoilers tease that Thomas Forrester’s (Matthew Atkinson) dark side will remain. He may not be stirring up baby drama or contributing to murders anymore, but he’s not a truly changed man either. B&B fans can expect Thomas to once again do some underhanded things as he works to get what he wants.

Of course, Thomas was professing his love and apologizing to Hope Logan (Annika Noelle) not too long ago. Brooke Forrester (Katherine Kelly Lang) viewed that as another attempt to manipulate Hope – and it seems she may have been right. There might be part of Thomas that’s genuinely sorry, but he’s still sneaky when you get to the heart of him.

The Bold and the Beautiful spoilers say Hope will stand her ground when it comes to Thomas. She certainly won’t budge on getting back together. Furthermore, Hope and Liam Spencer (Scott Clifton) will hope to serve as the main influences in Douglas Forrester’s (Henry Joseph Samiri) life. It looks like Hope will manage to turn Thomas against her as well as her family.

Brooke nearly killed Thomas through that shove by the cliff, so he won’t have much use for her either. He’ll begin to view the whole Logan clan as toxic to the Forresters. Thomas won’t want them intertwined in their lives or their business. As a result, The Bold and the Beautiful spoilers say Thomas will do some brainstorming and come up with a shocking new strategy.

Naturally, Thomas won’t plan to murder the women one by one. He’s got a dark side, but it’s not THAT dark! However, whatever Thomas has in store will still be ruthless. This may involve sabotaging any Logans at Forrester Creations and driving them out. Thomas could also make an effort to blow up Ridge Forrester’s (Thosten Kaye) marriage and get Brooke out of the picture.

The point is Thomas hasn’t really changed, which could spell even bigger trouble down the road. We’ll give you updates as other B&B news comes in. Stay tuned to the CBS soap and don’t forget to check CDL often for the latest Bold and the Beautiful spoilers, update and news.