BY hellodrdavis on February 26, 2019 | Comments: one comment
Related : Soap Opera, Spoiler, Television, The Bold and the Beautiful 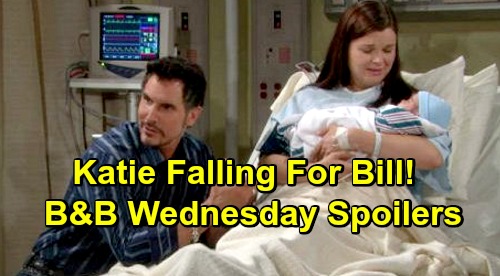 The Bold and the Beautiful spoilers for Wednesday, February 27, tease that Bill Spencer (Don Diamont) will have some kind words for Katie Forrester (Heather Tom). Katie is still reeling from her split with Thorne Forrester (Ingo Rademacher) and she’s on thin ice emotionally. But Bill’s impromptu visit to see her and Will Spencer (Finnegan George) has done her good. She likes seeing Will and Bill getting along so well.

Of course, Katie may not admit it, but she’s got some feelings for Bill that have been stirred up recently. Donna Logan (Jennifer Gareis) has been subtly pressuring Katie about her residual feelings for Bill, since she teamed up with Justin Barber (Aaron D. Spears) to try to bring “Batie” back together.

On Wednesday’s episode, Bill, Will, and Katie will continue to enjoy their visit together, and Bill will reaffirm that he’s dedicated to putting his family first. That will be music to Katie’s ears, but mostly she’ll just enjoy seeing firsthand that Bill actually means what he says. All she has to do is look at how happy Will is right now, and it’s obvious.

Meanwhile, on the new episode of B&B on Wednesday, February 27, Wyatt Spencer (Darin Brooks) and Sally Spectra (Courtney Hope) will decide that it’s time to disclose their plan to move to Spencer Publications. They’ll brace themselves, and then let Eric Forrester (John McCook) and Quinn Forrester (Rena Sofer) know about their resignation.

Ultimately, Eric will probably understand how important it is for Wyatt to work with his father and about Sally’s desire to revive her family’s fashion house. Still, it will be a big loss for Forrester.