The Bold and the Beautiful Spoilers: Steffy Panics After Taylor Reveals Reese Adoption Shocker – Fears Phoebe Could Be Beth

BY Heather Hughes on February 26, 2019 | Comments: one comment
Related : Soap Opera, Spoiler, Television, The Bold and the Beautiful 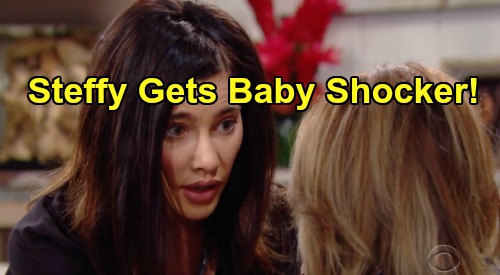 The Bold and the Beautiful (B&B) spoilers tease that Steffy Forrester (Jacqueline MacInnes Wood) will open up to Dr. Taylor Hayes (Hunter Tylo) during the week of March 4-8. She’ll fill Taylor in on Hope Spencer’s (Annika Noelle) push for a “Steam” reunion. Taylor may think that’s great news since Steffy would love to reunite with Liam Spencer (Scott Clifton) and get her family back.

However, Steffy may try to dampen Taylor’s excitement. She’ll hate to see Hope in so much pain. Besides, Steffy won’t even think Liam’s on board with the idea. She’ll contend that he just wants to be there for Hope and get his marriage back on track. Of course, Taylor may believe Liam will come around in time. She’ll probably have faith that everything will work out just like it’s supposed to.

The Bold and the Beautiful spoilers say Taylor may become a meddling mom again. She’ll most likely end up in a few fights with Brooke Forrester (Katherine Kelly Lang), who’ll be equally determined to meddle. They both seem to think they’re in charge of their daughters’ love lives.

Nevertheless, Hope’s heartbreak will be the driving force of what’s next. Her desperation could be what ends “Lope” and sets the stage for “Steam” once more. B&B fans can expect Taylor to cheer Steffy and Liam on. She’ll feel confident that they can be the perfect little fam, especially now that “Phoebe Forrester” (Isabella de Armas and Redford Prindiville) is Kelly Spencer’s (Zoe Pennington and Chloe Teperman) sister.

The Bold and the Beautiful viewers can’t forget about Taylor’s secret through. She knows Dr. Reese Buckingham (Wayne Brady) facilitated this shady adoption, which should be important. Taylor may inadvertently spill the beans sooner or later. That could get the wheels turning for Steffy, who already faced that suspicious outburst from Zoe Buckingham (Kiara Barnes).

Will Steffy find out Reese was involved and wonder what else he covered up? Steffy is a smart gal, so she may prove “Phoebe” is Beth Spencer. She’d naturally worry about losing her beloved bundle of joy. This could also derail her reunion with Liam before it ever begins – IF Steffy chooses to reveal the shocker! There’s no guarantee she will when she’s got so much to lose.