The Bold and the Beautiful Spoilers: Wednesday, July 10 – Liam Tells Hope He Loves Her – Xander Confronts Thomas Over Emma’s Death 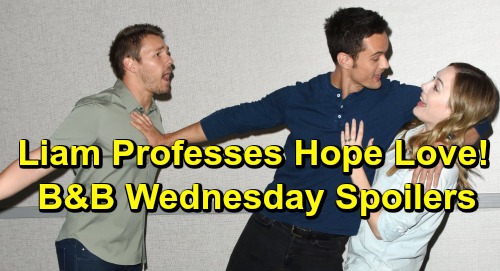 The Bold and the Beautiful spoilers for Wednesday, July 10, tease that Liam Spencer (Scott Clifton) will lay everything on the line. He’s just learned that Hope Logan (Annika Noelle) accepted Thomas Forrester’s (Matthew Atkinson) marriage proposal, and he’s horrified by the development. He’ll decide to pull out all the stops and do everything in his power to get Hope to call off her engagement.

Liam knows that Thomas is bad news. After all, what kind of guy uses his innocent little son to try to rope a grieving woman into marriage? Of course, Liam doesn’t even know half of what Thomas has done, but he knows that Hope marrying the guy is a rotten idea. And he’ll do anything to get Hope to see the light.

On Wednesday’s episode, Liam will try a different tactic. Simply telling Hope that Thomas is a bad guy isn’t exactly working, so Liam will need another strategy. According to B&B spoilers, he’ll decide to tell Hope how much he loves her, in the hopes that she’ll realize that she could never love Thomas the way she loves him.

But it doesn’t look like Hope will budge in her decision to marry Thomas. After all, she didn’t really make her decision to marry him based on love, so Liam’s declaration of love probably won’t persuade her any. Hope sees her pending marriage to Thomas as more of a business decision and something she has to do to move on with her life and have any shot of being a mother.

Meanwhile, on the new episode of B&B on Wednesday, July 10, Xander Avant (Adain Bradley) will initiate a big confrontation with Thomas. Xander was nearly at his wit’s end with keeping the secret about Beth Spencer’s existence, but when Emma Barber (Nia Sioux) turned up dead, that was the last straw.

And now that Xander has evidence that Thomas was following Emma on the night of her accident and stopped his car at the accident site, he just can’t take it anymore. As B&B viewers know, Xander really cared for Emma, and he is unwilling to let her murder go unavenged.

But instead of going to the police, Xander will make a dangerous decision. He’ll decide to confront Thomas directly about his role in Emma’s death on Mulholland Road. According to B&B spoilers, this will put Xander’s life in danger. Thomas is a dangerous man, and Xander could be the next to die if he’s not careful.

We’ll see what happens when Xander lets Thomas know about the GPS evidence he found in Thomas’ car. Thomas will probably try to explain it away, but Xander likely won’t let up on the matter. Expect a major confrontation between the men, as well as for Thomas to once again start throwing around threats.