BY hellodrdavis on July 16, 2019 | Comments: one comment
Related : Soap Opera, Spoiler, Television, The Bold and the Beautiful 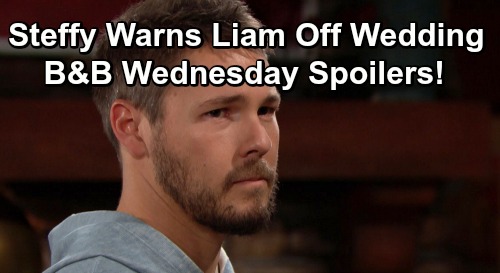 The Bold and the Beautiful spoilers for Wednesday, July 17, tease that Ridge Forrester (Thorsten Kaye) will decide that he’s heard about enough badmouthing of his son from Brooke Forrester (Katherine Kelly Lang). As B&B viewers know, Ridge just got an earful from Brooke about how she thinks that Thomas Forrester (Matthew Atkinson) has manipulated Hope Logan (Annika Noelle) into marrying him.

Brooke simply isn’t happy about Thomas and Hope’s upcoming wedding, and she’s especially unhappy that they’ve decided to get married right away. Of course, when Hope and Liam Spencer (Scott Clifton) got engaged when Ridge’s daughter Steffy Forrester (Jacqueline MacInnes Wood) was pregnant with Liam’s child, Brooke expected Ridge to accept the situation. But now Brooke doesn’t want to accept that Hope is engaged to Thomas.

And that’s going to peeve Ridge. According to The Bold and the Beautiful spoilers, we’ll see a serious argument between Brooke and Ridge on Wednesday’s episode, after Ridge confronts his wife for her attitude about Thomas. He’ll call Brooke out for hating the idea of Thomas marrying Hope, and he might just point out the double-standard that she’s operating from…something that likely won’t go over well with Brooke.

Of course, as it turns out Brooke is very right to be concerned about Thomas and his motivation for wanting to marry Hope. As B&B viewers know, Thomas knows that Beth Spencer is alive and well, but he’s keeping this from Hope and Liam, all because he’s fixated on Hope and wants to make her his own. Plus, he heavily contributed to Emma Barber’s (Nia Sioux) fatal car accident, so he’s got some evil proclivities.

At any rate, Brooke and Ridge are going to have to work things out eventually, because this wedding is going to happen one way or another. Ongoing B&B spoilers indicate that we will see the wedding take place between Thomas and Hope, which should leave Ridge happy and Brooke completely disgusted.

Meanwhile, on the new episode of B&B on Wednesday, July 17, Liam will find himself in utter emotional turmoil. As B&B viewers know, he just found out that Hope and Thomas are getting married right away, and he’s devastated. But more than that, Liam’s frustrated that he can’t seem to get anyone to see just how manipulative Thomas is being. Really, the only person who sees Thomas in the same light as he does is Brooke.

Perhaps Steffy will try to comfort Liam as he gears himself up for the upcoming wedding. B&B spoilers say that Liam will decide to attend the wedding, so that Hope knows he’s there for her no matter what. Steffy may try to talk him out of attending the wedding, but it looks like his mind will be made up.

As Liam psychs himself up for witnessing Thomas and Hope’s union, he’ll spend some time in reflective mode. B&B viewers can expect to see some flashback scenes, as Liam remembers some of the key moments in his relationship and romance with Hope. He’ll likely wish there was a way that he could persuade Hope to want to get those good times back as well, but there’s only so much he can do, since Hope’s determined to marry Thomas.