BY Heather Hughes on July 24, 2019 | Comments: one comment
Related : Soap Opera, Spoiler, Television, The Bold and the Beautiful 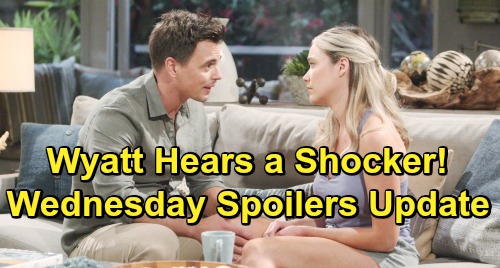 The Bold and the Beautiful (B&B) spoilers update for Wednesday, July 24, tease that Hope Forrester (Annika Noelle) will find herself feeling lost. She’s had a hole in her heart ever since Beth Spencer “died,” but nothing can truly take away her pain. Despite Hope’s attempts to fill the void, only a Beth reunion could really help her.

Hope was willing to marry Thomas Forrester (Matthew Atkinson) to build a family and be a mother to Douglas Forrester (Henry Joseph Samiri). Of course, that can’t fix Hope’s problems. Being Douglas’ mom is rewarding and Hope certainly loves that little boy. However, Douglas isn’t Beth and he never will be.

Thomas also isn’t Liam Spencer (Scott Clifton), the man Hope is truly in love with. Now Hope’s stuck in this loveless marriage and doesn’t feel any better than before. As she ponders how everything went so horribly wrong, Hope will lean on Brooke Forrester (Katherine Kelly Lang). The Bold and the Beautiful spoilers say Hope will need Brooke’s support and guidance in Wednesday’s B&B episode.

Hope will open up about how much she longs for Beth and how much she wishes she could be her mother. She’ll try to accept her new life with Thomas and Douglas, but she’ll feel so out of place in it. Hope will have a hard time wrapping her head around her circumstances, especially when she so desperately wants her baby girl back.

Over with Florence “Flo” Fulton (Katrina Bowden), she’ll inadvertently blab something significant. Flo won’t divulge the whole baby swap shocker, but she’ll indeed admit something that stuns Wyatt Spencer (Darin Brooks). The Bold and the Beautiful spoilers say Flo may try to explain away whatever she divulges, but that won’t help since Wyatt and Liam have teamed up.

Once Wyatt knows this tidbit, he’s bound to pass it along to his brother. Liam won’t stop digging until he gets some firm answers, which will spell big trouble for Flo next week. As the walls close in, Flo will make a major confession – most likely about being the fake birth mom.