BY Heather Hughes on June 26, 2019 | Comments: one comment
Related : Soap Opera, Spoiler, Television, The Bold and the Beautiful 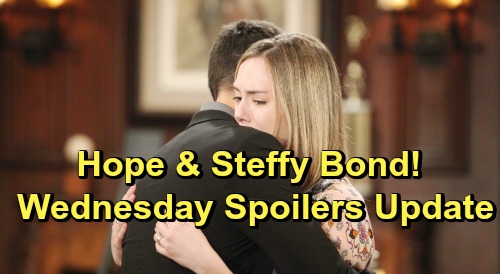 The Bold and the Beautiful (B&B) spoilers update for Wednesday, June 26, tease that an emotional memorial service will begin. Emma Barber’s (Nia Sioux) death sent shockwaves through Forrester Creations and the staff that knew Emma so well. There are several other B&B characters who have been left reeling, too.

The Forresters will gather along with the Avants, Spencers, Logans and Spectras. They won’t quite know how to say goodbye, but they’ll come together to try. Emma’s close friend, Tiffany (Maile Brady), will definitely have a rough time. How’s she supposed to bid farewell to her bestie? It’ll be a difficult day, but Tiffany will hang in there and honor Emma’s memory.

Justin Barber (Aaron D. Spears) will also be a mess over his beloved niece’s demise. He’ll likely make a speech as he tries to work through his grief, but it’s going to be brutal. The loss is still fresh, so Justin will struggle to wrap his head around it. Emma is gone far too soon, which Steffy Forrester (Jacqueline MacInnes Wood) and Hope Logan (Annika Noelle) will agree on.

The Bold and the Beautiful spoilers say Hope and Steffy will grieve through memories on Wednesday. They’ll tell some stories and attempt to comfort each other, so it’ll be nice to see them bonding – even if the reason’s a grim one. Steffy may assure Hope that she’s there anytime. She won’t want Hope sinking into an even darker place, so she’ll feel like it’s important to reach out.

The memorial will certainly remind Hope of her daughter’s “death,” but she’ll gather her strength and press on. Thomas Forrester (Matthew Atkinson) will undoubtedly be lurking around every corner. He’s already using Emma’s death to his advantage, which is despicable considering Thomas played a major role in it. However, Thomas will hope his perseverance and patience are rewarded eventually.

Quinn Forrester (Rena Sofer) and Eric Forrester (John McCook) will also remember Emma. It looks like they’ll join Hope and Steffy’s discussion at some point. There’ll surely be plenty of tears and maybe even a few laughs as everyone reflects on the lives Emma touched. She was a joyful spirit who’ll be missed by several key characters.

Xander Avant (Adain Bradley) will be especially distraught on Wednesday. He’s suspicious of Thomas’ involvement in Emma’s death and hates that the Beth secret cost Emma so dearly. Once this memorial service concludes, Xander may be even more determined to get to the bottom of things.