BY Heather Hughes on March 27, 2019 | Comments: one comment
Related : Soap Opera, Spoiler, Television, The Bold and the Beautiful 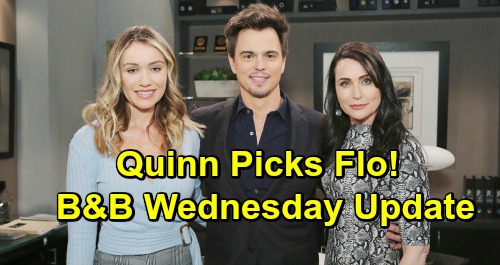 The Bold and the Beautiful (B&B) spoilers for Wednesday, March 27, tease that Ridge Forrester (Thorsten Kaye) will check out a hot new line for Forrester Creations. He’ll be impressed with FC’s new athletic designs and even more impressed with the person behind them. Sally Spectra (Courtney Hope) will be the one who really astounds Ridge with her talent.

Ridge will view Sally as some fresh eyes on the industry and somebody with a brain full of ideas. He’ll approach Sally about sticking around as a Forrester designer and bailing on her deal with Bill Spencer (Don Diamont). Of course, Bill could be part of why Ridge is doing this. He certainly doesn’t want Sally leaving to make Bill even richer – especially if it could hurt Forrester Creations’ profits.

Still, it seems Ridge will genuinely approve of Sally’s styles and want her to stay on board. He’ll make Sally an appealing offer and hope she agrees. However, Sally’s loyalty will present a problem. Wyatt Spencer (Darin Brooks) played hardball with Bill just so she could have another shot at a fashion house. He’d feel betrayed if Sally backed out now, which is why she’ll have to consider this carefully.

Sally will let Ridge know she’ll need time to think about it, so he’ll grant her request. Meanwhile, Quinn Forrester (Rena Sofer) will make a request of her own. She’ll be ecstatic when she reunites with Florence “Flo” Fulton (Katrina Bowden), Wyatt’s former flame from high school. It turns out Quinn and Flo were quite chummy back then, so she’ll be overjoyed when she catches up and asks for something.

The Bold and the Beautiful spoilers say Quinn’s warmth will leave Flo deeply moved. Flo will also be touched by Quinn’s request, which will undoubtedly lead to spending more time together. Quinn would love for Wyatt to spend more time with Flo as well. It’s obvious that Flo is Quinn’s pick for her son, so B&B fans can expect some hurt feelings for Sally.

Wyatt will do his best to curb his mom’s Flo enthusiasm, but Quinn will continue to be a problem. The Bold and the Beautiful spoilers say Wyatt will once again find himself in some romantic jams, so things should get interesting. We’ll give you updates as other B&B news comes in. Stay tuned to the CBS soap and don’t forget to check CDL often for the latest Bold and the Beautiful spoilers, updates, and news.