The Bold and the Beautiful Spoilers: Liam Cheats with Steffy in Paris, Can’t Fight Temptation – Betrayal Before Beth Reveal?

BY Kinsley Goldman on March 26, 2019 | Comments: one comment
Related : Soap Opera, Spoiler, Television, The Bold and the Beautiful 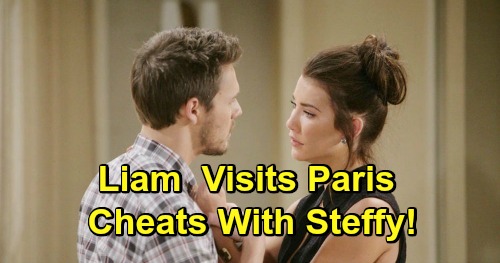 The Bold and the Beautiful (B&B) spoilers tease that Liam Spencer (Scott Clifton) may start longing for the girls. Steffy Forrester (Jacqueline MacInnes Wood) decided to take Kelly Spencer (Zoe Pennington and Chloe Teperman) and “Phoebe Forrester” (Isabella de Armas and Redford Prindiville) to Paris, but Liam may want to visit at some point. He’s Kelly’s father and has vowed to be a dad to “Phoebe,” too.

Of course, B&B fans know Liam is actually “Phoebe’s” biological father, but that big reveal will come later. The point is Liam needs to go see Kelly and “Phoebe” at least a few times while Steffy’s gone. Paris is only a plane ride away and Bill Spencer (Don Diamont) would surely let Liam use the Spencer jet.

Steffy wants Liam and Hope Spencer (Annika Noelle) to work on their marriage, but a couple nights in Paris wouldn’t hurt…or would they? The Bold and the Beautiful has the prime cheating setup here. It’s easy to imagine Hope pushing Liam to go be with the girls for a bit. She could assure Liam that she’ll be just fine without him for a weekend here and there.

However, there’s no predicting what might happen with Liam and Steffy’s lingering spark. After the girls went to sleep, they might have a candlelight dinner and reflect on warm memories. If old feelings came rushing back, would they be able to fight temptation? Paris is a very romantic city and there’d be nobody around to stop them. Liam could home with a secret after a deep betrayal!

Since B&B viewers know how Liam tends to waffle, he might decide sleeping with Steffy was a mistake. They could agree to put their hookup behind them and move on. This would give the show somewhere to go once Jacqueline MacInnes Wood’s maternity leave is over. It’d be fun to see some flashbacks of a hot “Steam” night once Steffy returned home.

Hope pushed Liam to be with Steffy, but he refused. He promised to stand by her as his wife, so Hope could end up devastated and furious. It’s one thing when you’re giving someone the opportunity to move on. It’s quite another when someone sleeps with his ex behind your back.

This would be the perfect way to get Hope all riled up before “Phoebe” is exposed as Beth Spencer. The Bold and the Beautiful spoilers say this could really take Hope and Steffy’s feud to the next level! Do you think Liam will cheat with Steffy? We’ll give you updates as other B&B news comes in. Stick with the CBS soap and don’t forget to check CDL often for the latest Bold and the Beautiful spoilers, updates, and news.