The Bold and the Beautiful Spoilers: Wednesday, May 29 – Hope & Liam Grieve For The Life They Should Have Had – Flo & Wyatt Make Love

BY hellodrdavis on May 28, 2019 | Comments: Leave Comments
Related : Soap Opera, Spoiler, Television, The Bold and the Beautiful 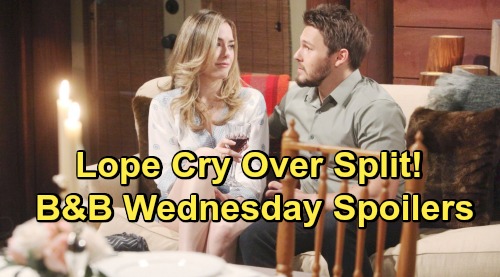 The Bold and the Beautiful spoilers for Wednesday, May 29, tease that Hope Spencer (Annika Noelle) will be once again stunned by Thomas Forrester (Matthew Atkinson). He’s just planted another kiss on her in the passion of the moment, after hearing that Hope and Liam Spencer (Scott Clifton) have decided to end their marriage.

But it looks like Hope will again remind Thomas that she’s still in love with Liam, despite their plans to dissolve their union. Still, Thomas won’t be sorry about his actions, at least not deep down. He may apologize to Hope, but he’ll be glad that he made a move, and he’ll be even more happy to hear that Hope will soon be single and available to him.

As for Hope, she’ll have other issues to deal with. She’ll meet back up with Liam, and the two will talk about their life together and what could have been. As B&B viewers know, they’re both still devastated about the loss of their daughter Beth Spencer, and they’ll gently discuss the life they were supposed to have together with their daughter.

Look for some tearful and heartfelt scenes between the couple, as they talk about their beloved Beth and what might have been, had things not ended in tragedy in the way they did. It will be some of “Lope’s” final moments as a married couple.

Meanwhile, on the new episode of B&B on Wednesday, May 29, Wyatt Spencer (Darin Brooks) and Florence “Flo” Fulton (Katrina Bowden) will spend some intimate time together. The two just had a great date night swimming in the Forrester pool and having the place all to themselves.

Flo and Wyatt will spend the rest of the evening making love and enjoying each other’s company, as Flo puts her guilt over keeping the secret about Beth on the back burner and just lets herself enjoy her time with her high-school sweetheart.