BY Amanda Austin on September 24, 2019 | Comments: Leave Comments
Related : Soap Opera, The Bold and the Beautiful 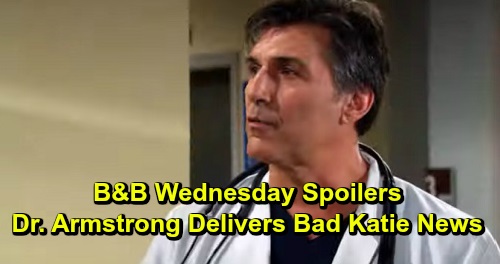 Of course, at this point Dr. Jordan Armstrong (Vincent Irizarry) only knows that Katie is in kidney failure, but he doesn’t yet know how dire the situation is. On Wednesday’s B&B episode, Dr. Armstrong will get more test results back and he’ll get a clearer picture of Katie’s condition and exactly what he’s dealing with when it comes to her prognosis.

Unfortunately, it seems that both Katie’s diagnosis and her prognosis will be troubling. Dr. Armstrong will discover that both of Katie’s kidneys are in complete failure. Clearly, that will be terrifying news for Bill and the rest of Katie’s family, but it seems there will be more bad news. This could have to do with Katie’s status as a heart transplant patient. Might she be a poor candidate for a donor kidney due to her heart transplant status?

Or perhaps there will be another complication or complications that will make Katie’s status as a donor recipient difficult. Dr. Armstrong might recommend that Katie’s sisters be tested as possible donors, and even possibly Flo Fulton (Katrina Bowden) or Hope Logan (Annika Noelle) could be candidates for a donor kidney. Whatever the case, it looks like Katie will be in terrible shape and time will be of the essence for a new kidney.

Meanwhile, on the new episode of B&B on Wednesday, September 25, Quinn Forrester (Rena Sofer) will reel from the news she’s just heard from her son Wyatt Spencer (Darin Brooks). As B&B viewers know, Wyatt has just broken the news to Quinn that he proposed to Sally Spectra (Courtney Hope). That just about ruined Quinn’s day, who has been hoping for an eventual reunion between Wyatt and Flo.

Wyatt will probably get an earful from Quinn now! She can’t stand Sally and doesn’t want Wyatt anywhere near her. She figured that Wyatt would eventually forgive Flo for her transgressions against the Forrester, Logan, and Spencer families, and that it would probably take time for him to get there, but she really wasn’t expecting him to get serious with Sally all of the sudden.

Of course, Flo had a whole plan in place to win Wyatt back and get his forgiveness for what she did to the people Wyatt loves. But now she may think twice about that plan. Will she give up in her quest to get Wyatt back, or will she be even more determined now to fight for him? We could see a battle of the strong-willed ladies for Wyatt if Flo decides to dig in and really fight for her man!