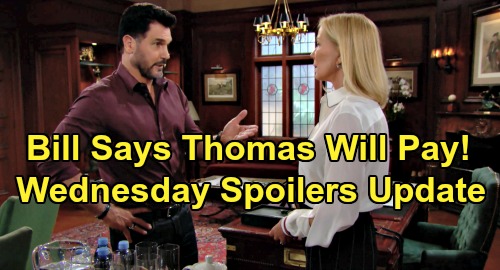 The Bold and the Beautiful (B&B) spoilers update for Wednesday, September 4, tease that Thomas Forrester (Matthew Atkinson) will get a disturbing visit. Bill Spencer (Don Diamont) is livid over all the devastation Thomas caused. Thomas wasn’t in on the baby swap from the get-go, but he definitely went to great lengths to keep it quiet. B&B fans know Thomas got downright vicious and consistently hurled threats.

Now it’s Thomas’ turn to face threats courtesy of dangerous “Dollar Bill.” The Bold and the Beautiful spoilers say Bill will unleash his wrath on Thomas. He’ll show no mercy as he rants about the pain Thomas brought for Hope Logan (Annika Noelle), Liam Spencer (Scott Clifton), Steffy Forrester (Jacqueline MacInnes Wood) and everyone connected to them.

Of course, Bill won’t be happy about the recent cliff chaos with Brooke Forrester (Katherine Kelly Lang) either. Thomas may remind Bill that he covered for Brooke, but Bill might counter that it was the least he could do. He won’t think Thomas is some hero, especially when Brooke was just trying to defend her daughter.

Now Brooke’s marriage to Ridge Forrester (Thorsten Kaye) is suffering, so that’ll be one more reason for Bill to lash out. He’ll think Thomas only brings sorrow to everybody around him. However, Bill will assure Thomas that he’s going to pay for his actions. The Bold and the Beautiful spoilers say it’ll be Bill’s personal mission to see that justice is done.

Thomas will play it cool and even fire back during this tense conversation. Nevertheless, Thomas should be fearful deep down. He may be out of the woods when it comes to his health, but he certainly isn’t as far as legal consequences go. Thomas will worry about being tied to Emma Barber’s (Nia Sioux) death and the punishment that could bring.

Meanwhile, Ridge Forrester’s (Thorsten Kaye) meeting with Florence “Flo” Fulton (Katrina Bowden) will get heated. Flo doesn’t deny that she made some horrible choices, but Thomas made some horrible ones, too. She’ll make some statements against Thomas that’ll leave Ridge more riled than ever. He’ll completely lose it and unload all his frustration in a moment of fury.

Before Ridge storms out, he’ll make it clear that Flo’s going to get what she’s got coming! The Bold and the Beautiful spoilers say Flo will ultimately slide out of trouble instead, so Ridge will have to cope with that down the road. We’ll give you updates as other B&B news emerges. Stay tuned to the CBS soap and don’t forget to check CDL often for the latest Bold and the Beautiful spoilers, updates and news.