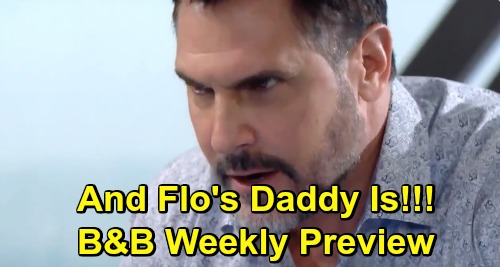 The Bold and the Beautiful (B&B) spoilers preview and promo video for the week of April 8-12 tease that chaos will erupt thanks to the mystery of Florence “Flo” Fulton’s (Katrina Bowden) father. Shauna Fulton (Denise Richards) was taken aback when Quinn Forrester (Rena Sofer) revealed the identity of Wyatt Spencer’s (Darin Brooks) dad. She could barely believe it since she thinks Bill Spencer (Don Diamont) is Flo’s father, too.

Unfortunately, Bill won’t have a clue who Shauna is. He won’t recognize her at all, but Shauna will remind him of their one-night stand all those years ago. Naturally, alarm bells will start going off for Bill. He’ll realize where this conversation is heading, and he’ll be exactly right.

After Shauna argues that Flo is Bill’s daughter, he’ll refuse to believe it. The Bold and the Beautiful spoilers say Bill will think this is some sort of shakedown. It’s no secret that “Dollar Bill” is loaded, so he’ll feel like Shauna is a gold digger who just wants a piece of the Spencer pie.

However, Quinn will vouch for her friend. Both Shauna and Quinn will agree this is the last thing they want. They’ll explain that Wyatt has a history with Flo, so that makes all of this more complicated.

Quinn will certainly hope there’s still a chance at pushing Wyatt and Flo together, but that can’t happen if they’re half-siblings. She’ll contend that they need a DNA test to confirm this one way or another.

Of course, B&B fans know Flo already did a DNA kit that could produce a match for her father or another relative. She’s still waiting on results, but she might get some this week. The Bold and the Beautiful weekly preview video shows Hope Spencer (Annika Noelle) seemingly tearing up in happiness. She’ll exclaim that this must be Hope’s big secret, so is Flo tied to Hope in a surprising way?

Flo’s father could be Deacon Sharpe (Sean Kanan), which would make her Hope’s half-sister. Hope’s reaction might back up that idea if she learns the truth and assumes Flo already knew. Then again, Hope might just think it’s Bill and consider Flo a family member through her husband, Liam Spencer (Scott Clifton).

There are other options to consider as well. The Bold and the Beautiful spoilers say Shauna will ultimately concede she was wild in her younger days. She slept with many men, so there’ll be a long list to comb through!

Regardless, this mystery will add to the mayhem Flo’s already dealing with. We’ll give you updates as other B&B news comes in. Stay tuned to the CBS soap and don’t forget to check CDL often for the latest Bold and the Beautiful spoilers, updates, and news.